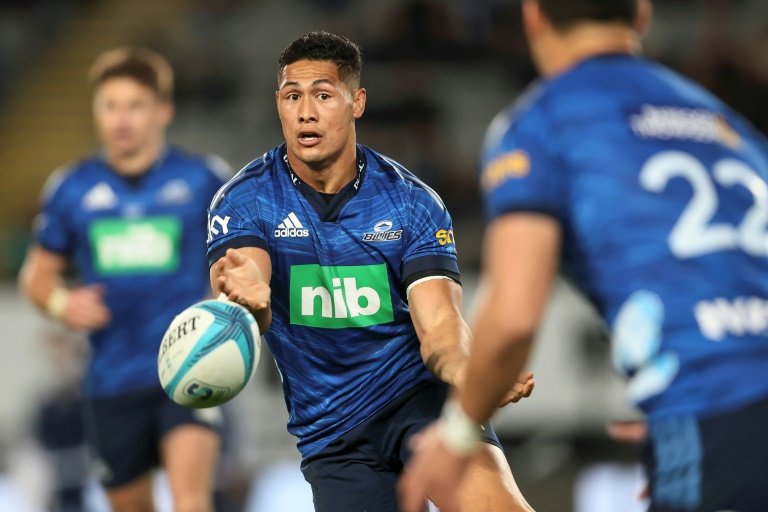 Having qualified in top spot for the quarter-finals, the Blues looked rattled as they trailed 6-0 against the Highlanders after half an hour in Auckland but they found their rhythm to power home 35-6, boosted by two tries to star playmaker Beauden Barrett.

Earlier, Chiefs captain Brad Weber also crossed twice as his side outclassed the NSW Waratahs 39-15 in Hamilton to set up a semi-final against the Canterbury Crusaders.

The ACT Brumbies can prevent an all-New Zealand presence in the final four if they beat the Wellington Hurricanes in the last quarter-final on Saturday.

The winners in Canberra will face a Blues side that has notched 14 straight victories, although they only discovered their attacking fluency after Highlanders hooker Andrew Makalio was shown a red card for a reckless, no-arms tackle midway through the first half at Eden Park.

Akira Ioane put the hosts in front, benefitting from a delightful assist from brother Rieko, before Barrett scythed across to establish a 14-6 lead at halftime.

Barrett said he was unsurprised by the sluggish start.

"We took a bit of time to find our groove but that's probably expected.

"Around finals footy time, everyone can go into their shell but it's great that we finally expressed ourselves."

The Blues were without captain Dalton Papalii, who underwent surgery for appendicitis on Friday.

The in-form All Blacks loose forward is unlikely to feature in the finals and his availability for the Test series against Ireland in July is in doubt.

The Highlanders, who only won four of 14 matches to reach the quarter-finals, were also missing All Blacks star power, with halfback Aaron Smith having a groin problem.

An even encounter in Hamilton was decided primarily by the Chiefs' ability to capitalise on attacking opportunities.

Weber said the prospect of facing the 12-time champion Crusaders -- who outclassed the Queensland Reds 37-15 on Friday -- doesn't fluster him.

"What an awesome challenge to play the defending champs at home," he said.

"We've beaten them once this season so we'll look to make it two."

While well beaten, the Waratahs could reflect on a season of vast improvement after going winless in 2021.

Skipper Jake Gordon was satisfied with their progress under first-year coach Darren Coleman.

"Last year was a tough year for the franchise and the team," he said.

"To bounce back like we have... we have a lot of growth left in us."