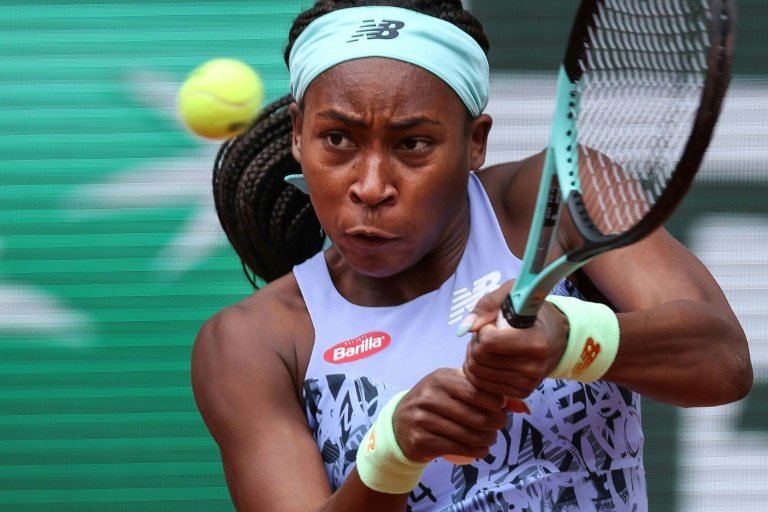 'No freak-out': Coco Gauff returns the ball to Elise Mertens on Sunday / © AFP

American teenager Coco Gauff insists there will be no more Roland Garros "freak-outs" as she attempts to reach her first Grand Slam semi-final.

The 18-year-old made the last-eight in Paris for the second successive year on Sunday with a 6-4, 6-0 victory over Belgium's Elise Mertens.

In the quarter-finals, she will face either US compatriot, and 2018 runner-up, Sloane Stephens or 23rd-seeded Jil Teichmann of Switzerland with the harsh lessons of her 2021 run to the quarter-finals still fresh in her memory.

Twelve months ago, she slipped to a straight-sets defeat to eventual champion Barbora Krejcikova despite a handful of openings.

"To make it to the top of the class, I think just keep doing what I'm doing and not freaking out," said Gauff.

"I think that was the biggest lesson I learned last year in my quarter-final match, I had a couple set points and I think I freaked out when some of those points didn't go my way.

"Today I didn't freak out when a couple of those important points didn't go my way."

Victory on Sunday meant Gauff, the junior champion at Roland Garros in 2018, has put together four straight wins for the first time since last year's run in Paris.

While in the French capital, Gauff has graduated high school, marking the occasion on Instagram with a family photo in front of the Eiffel Tower.

Securing her diploma has helped her feel more relaxed about her tennis career which took off in 2018 when, just 15, she became the youngest woman to qualify for Wimbledon.

Her profile rocketed when she went all the way to the fourth round at the All England Club, knocking out Venus Williams on the way.

"I really am just enjoying the tournament, enjoying life. I'm not thinking about the end result," she said.

"I'm just enjoying the match ahead of me and whatever happens happens, it's out of my control."