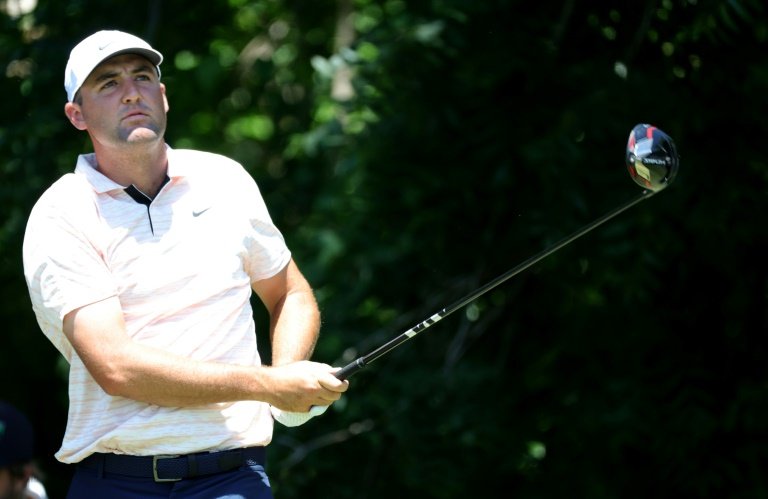 Top-ranked Masters champion Scottie Scheffler fired a five-under par 65 to keep a share of the lead after Friday's second round of the US PGA Charles Schwab Challenge.

Scheffler, chasing his fifth victory of the year, stood alongside fellow Americans Beau Hossler and Scott Stallings on nine-under 131 after 36 holes at Colonial Country Club in Fort Worth, Texas.

After winning his first US PGA title at Phoenix in February, Scheffler won at Bay Hill and captured the WGC Match Play title in March then won his first major title at the Masters in April to overtake Spain's Jon Rahm as world number one.

"I've definitely enjoyed the stuff that comes with winning majors and winning the other tournaments that I have," Scheffler said. "It has been a lot of fun."

Scheffler has not made a bogey in the first two rounds.

"I love that stat," Scheffler said. "I kept the stress off myself for the most part."

Scheffler missed the cut at last week's PGA Championship, giving him a much-needed break before a hometown event.

"It has been busy," he said. "Definitely a good reset. I came home and did nothing on Saturday and had a relaxing practice on Sunday. It was definitely a good little break."

Hot and windy weather is forecast for the weekend.

"I like it when the conditions are really hard and so I'd rather it be very difficult than very easy," Scheffler said. "If you're playing really good golf, you can extend yourself and I'm really excited for the challenge this weekend."

Scheffler opened with back-to-back birdie putts from about four feet and made a par save from just inside 10 feet at the par-4 seventh.

He began the back nine with a birdie then holed a 24-foot birdie putt at the 12th and a 14-footer for birdie at the 17th to share the lead again after being among eight co-leaders following the first 18 holes.

"I worked really hard just improving my iron play and creating a lot of different shots for myself," Scheffler said. "This course is a lot about the approaches to the green and it looks like the hard work is paying off out here."

Stallings fired a 64, the best round so far this week. He closed the front nine with a 20-foot birdie putt at the eighth and holeout from 37 feet at the ninth, then sank a birdie putt from just inside 29 feet at the 18th to share the lead.

"Had some good looks early," said Stallings. "I felt good on the greens, felt good with my stroke and nice to see them fall in there towards the second half of the round."

Hossler holed birdie putts at the par-3 eighth from 24 feet and the par-3 13th from 21 feet to highlight his bogey-free 65.

"Played a solid round," Hossler said. "Nothing too exciting. Hit a lot of greens and just made the round relatively stress free."

Patrick Reed, the 2018 Masters champion, was fourth on 132 with fellow Americans Pat Perez and Chris Kirk sharing fifth on 133.

Justin Thomas, who won his second major title at last week's PGA Championship, and fellow American Will Zalatoris, who lost at Southern Hills in a playoff, each missed the cut.

Chile's Mito Pereira, who missed out on the PGA playoff after a 72nd-hole collapse on Sunday, fired a 66 to stand on 136.