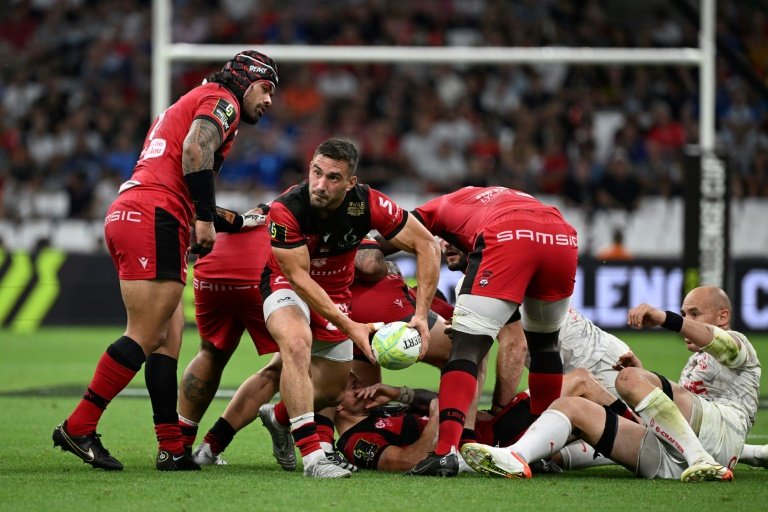 Mignoni found himself in the unlikely position of coaching his squad in Marseille against a team he not only played for, but was also backs coach during their European Cup glory days when the likes of Jonny Wilkinson and Matt Giteau led Toulon to three consecutive titles.

If that wasn't enough, he has also signed up to be director of rugby at Toulon next season working alongside current coach Franck Azema.

"We all wanted to do our best and win this title before Pierre left," Couilloud said, with Lyon never having won a continental title before.

Couilloud said Mignoni's departure had not really been discussed in the build-up to the match.

"But yes, you've got to be honest and say it's the end of a cycle," the scrum-half said.

"He's given so much to the club. For him and all the players he's helped improve, we wanted to get him this win.

"We're very happy with what we've done this year," he added. "Hopefully the best is yet to come."

Lyon completely overpowered a misfiring Toulon side at Marseilles Stade Velodrome late Saturday, Couilloud simply saying: "We were present in all aspects of the game."

Toulon coach Azema agreed: "They piled pressure on us and we just weren't able to counter them. We were systematically late and at the collision we weren't fierce enough.

"The notion of territory was essential at the beginning of the match. We managed a try to get back into the match... but one team was better than the other.

"That's competition. We still have one more match in the Top 14 against Racing next week. We'll relax, recuperate and go again. It's a new opportunity given to us."

Azema added: "When you lose, it's frustrating. It's going to go away, otherwise don't do competitive sport.

"You have to accept it. It's going to be rough tonight, but we will improve and we have to motivate ourselves once again."

Toulon skipper Charles Ollivon insisted it was a not a case of the favourites being over-confident.

"We just never got into the match," he said. "We got pushed back in attack and defence, our kicking game was below par and there was no sector of play where we dominated."

"We didn't deserve to win, but we win together and we lose together. As a squad we won't explode, we'll stick together."