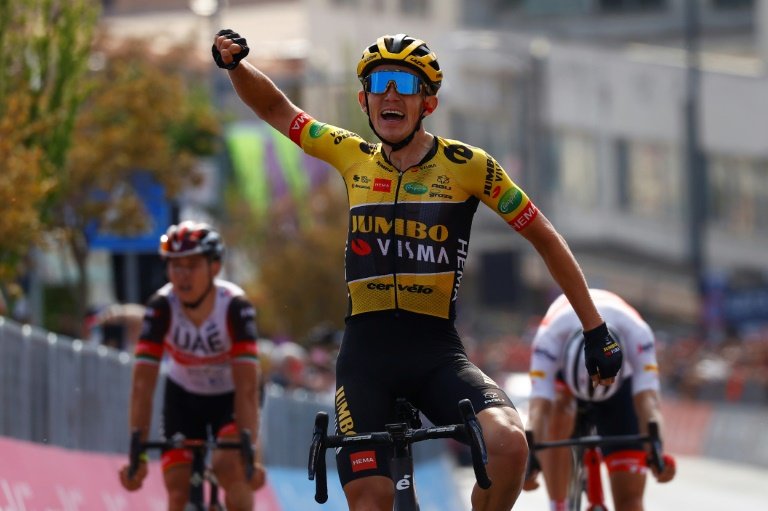 Dutch outsider Koen Bouwman won the hilly seventh stage of the Giro d'Italia on Friday beating three breakaway rivals on the line after the 196km run from Diamante to Potenza in Basilicata.

Spanish rider Juan Pedro Lopez of Trek holds the overall leader's pink jersey with challengers Simon Yates and Richard Carapaz finishing at the same time as the other title pretenders 2min 59sec adrift of the winner.

Mollema attempted and failed to drop the others from 2km out and when the four approached the steep finish line together Bouwman's burst was unstoppable.

"As we came to the line I knew it was mine to win," said Bouwman of his second professional win after a stage in the 2017 Dauphine.

"It feels the same as in the Dauphiné five years ago. I've been in trouble on the climb but I came back. I got great help from Tom Dumoulin in the last 2km.

"I was confident that I would win the sprint but I didn't expect the finish to be that steep. After the disappointment we had at Mount Etna, we decided to chase stages and that's what we did today.”

Trek rider Lopez finished nearly three minutes adrift of the stage winner but holds onto the leader's pink jersey which he grabbed Tuesday on Mount Etna.

"It's been a perfect scenario to have my team-mate, Bauke Mollema, at the front," said the Spaniard.

"I had a bad moment at the beginning with a flat tyre but my team brought me back to the bunch. I gave 100% to defend the Maglia Rosa again today."

Dumoulin came to the Giro as a title candidate but lost time on Mount Etna.

"After the disappointment on Etna we decided to go for stages," Bouwman explained after embracing his team leader at the line.

Bouwman also took the blue climb points jersey using his acceleration to rack up points on the day's four summits.

French sprinter Arnaud Demare retained the sprinters MagliaCiclamino jersey after back-to-back stage wins midweek and may have a chance to extend that in stage eight.

Saturday's stage will be raced around the great southern city of Naples finishing on the seaside promenade Via Francesco Caracciolo where Mark Cavendish won in 2013.