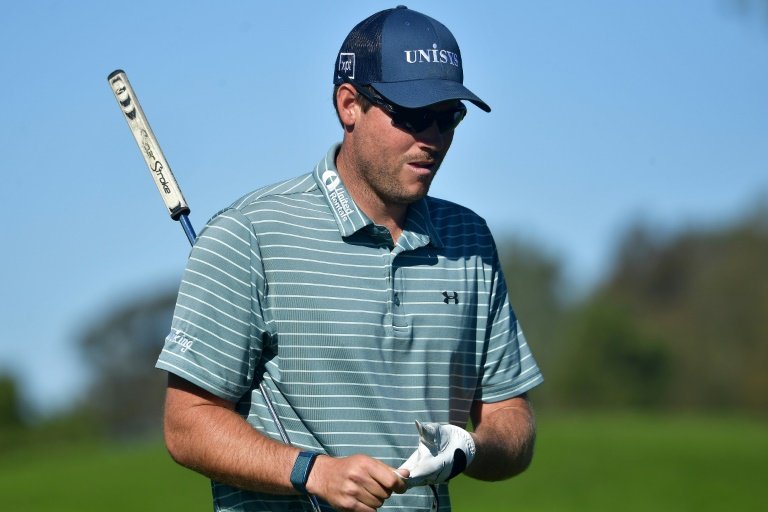 Unheralded Adam Schenk birdied eight holes in a row to share the lead with top-ranked Jon Rahm and Justin Thomas after Thursday's second round of the US PGA Farmers Insurance Open.

A day after his 30th birthday, Schenk torched the North Course at Torrey Pines for a career-low 62, 10-under par, to stand on 13-under alongside fellow American Thomas and Rahm, who won last year's US Open on Torrey's South Course.

"Unbelievable day," Schenk said. "I didn't know how many I made in a row. I knew I needed to capitalize while I was playing good golf and that's what I tried to do."

"Lost track of how many I made," he said. "I knew there was a lot of gettable holes and I needed to keep going if I wanted to get on top of the leaderboard and hopefully stay there throughout the weekend. I had to try to keep the pedal down and not get satisfied."

Schenk finished one shy of the US PGA record birdie streak set by Mark Calcavecchia at the 2009 Canadian Open and matched in 2019 by Kevin Chappell at Greenbrier.

After birdies at 16 and 17, Schenk lipped out a birdie attempt at 18 to miss sharing the course record of 61 with compatriots Mark Brooks and Brandt Snedeker.

"It would have been nice to have had that putt go in but I made so many," Schenk said. "You can't have them all go in I guess."

Rahm hit only four fairways but was able to solve the North Course for a 65 with only a lone bogey at 18, his ninth hole of the round.

"The score would make you think I played a lot better than I did," Rahm said. "I struggled finding the fairway. I was able to get myself back in position.

"Happy with my putting. Happy with the way I managed the course. For how little fairways I hit, I was able to reach the greens from the rough, which is pretty good."

Thomas also began on the back nine of the North Course and birdied three of his first four holes and closed with birdies on three of his final five, happy to shave five strokes off his opening-round score.

"The score was great but I just had control a lot better. I was able to make some putts and got on a little bit of a roll," Thomas said. "I'm just driving it well. If you drive it well you can make some birdies."

That's the step he hopes to take on the weekend, when the final two rounds will be played on the South Course.

"I have enough confidence and belief in my short irons and wedges that if I can put it in the fairway I can make some birdies," Thomas said.

American Cameron Tringale was fourth on 132 with American Peter Malnati fifth on 133.