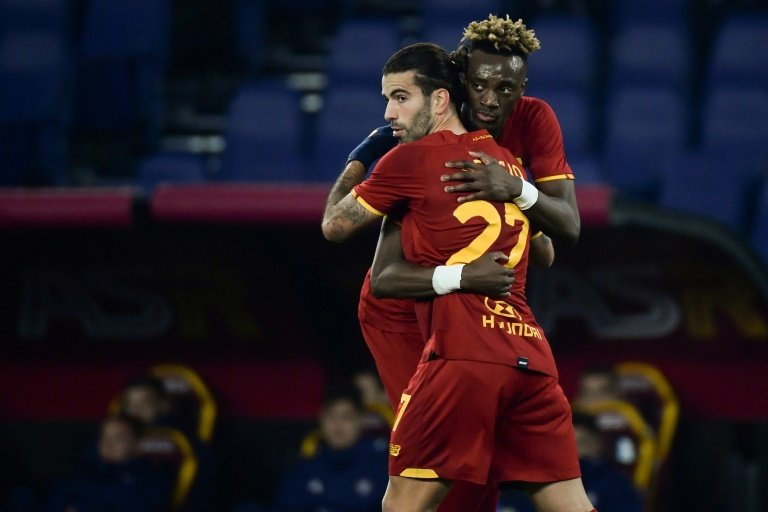 Sergio Oliveira was decisive on his Roma debut after scoring the penalty which gave his new team a 1-0 win over struggling Cagliari on Sunday, before leaders Inter Milan face a tough test at Atalanta.

Oliveira, who was signed on loan from Porto on Wednesday, stroked home a 33rd minute spot-kick at the Stadio Olimpico in Rome after a handball by Dalbert was given following a VAR check.

An uninspiring win moves Jose Mourinho's side up to sixth, six points behind Atalanta who are in the final Champions League spot ahead of their big match with champions Inter in Bergamo.

Inter can go four clear at the top with a win at the Gewiss Stadium, with title rivals AC Milan and Napoli both playing on Monday.

Roma came into the match off the back of two humiliating defeats to AC Milan and Juventus, and after losing key midfielder Lorenzo Pellegrini in the pre-match warm-up they failed to catch fire against Cagliari.

The 18th-placed side would have snatched a point with five minutes remaining had Rui Patricio not tipped Joao Pedro's close-range effort onto the bar.

"The win was obviously very important but it was the sort of match which should have been less stressful," said Mourinho, who blasted his team's mentality after the Juve defeat last weekend.

"We had complete control but the match could have finished four, 5-0 or 1-1. Usually when you play like this you don't feel any pressure but today I felt it right until the end of the match."

The hosts got themselves into good positions but were let down by a poor final ball or finish, with Nicolo Zaniolo coming closest to adding another goal when he dragged a shot just wide after breezing past Andrea Carboni and into the box.

Zaniolo, who is one of Italy's most talented footballers but has already suffered two serious knee injuries in his burgeoning career, also thought he had earned his team a fourth-minute penalty only for Lorenzo Maggioni to change his decision following an on-field review.

Cagliari would have escaped the relegation zone had they made it three wins in a row, but are two points from safety after another new boy in Nani made an immediate impression by setting up the leveller in Venezia's 1-1 home draw with Empoli.

The former Manchester United and Portugal winger arrived on the lagoon as a free agent on Friday and came on in the 72nd minute with Venezia -- who are 17th -- behind to Szymon Zurkowski's first-half strike.

Seconds later the 35-year-old rolled in David Okereke to fire home the leveller after playing a smart one-two with Mattia Aramu.

His entrance on the pitch gave Venezia an energy that they had lacked for most of the match, and Okereke would have had the winner three minutes later had Guglielmo Vicario not got down well to push away his powerful shot.

"It was a really good start, the team played well... We know it's an important period for us, we need to get as many points as possible," said Nani to DAZN.

"I was a bit worried because I haven't had many training sessions with the team and right now I'm not at my best physically but when you want to do something good you can."

Empoli sit 11th, one point behind Verona who won an entertaining early match at Sassuolo 4-2 thanks to Antonin Barak's hat-trick.