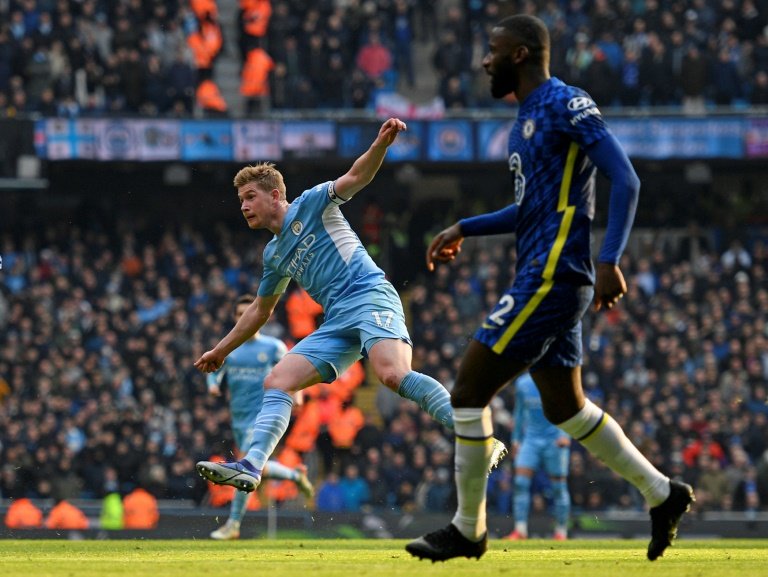 Chelsea boss Thomas Tuchel voiced his frustration at Romelu Lukaku after Kevin De Bruyne's brilliant strike beat the Blues 1-0 to open up a 13-point lead at the top of the table.

A tale of two Belgian internationals saw Lukaku spurn a chance to silence his critics early in the second half before De Bruyne produced the one outstanding moment of quality in the game by curling home from outside the box.

A 12th consecutive league win for the champions strengthens City's grip on the title race as they streak towards a fourth league crown in five seasons.

Chelsea got the better of Pep Guardiola's men in last season's Champions League final, but securing their place in Europe's top club competition next season now looks like the height of their ambitions for the rest of the Premier League season.

The Blues remain second but have won just one of their last six league games.

"Our offensive players need to show up more. We need consistency. Chelsea is not a place to hide," said Tuchel.

Lukaku was supposed to be the final piece required to turn the European champions into challengers for City's title over the long haul. 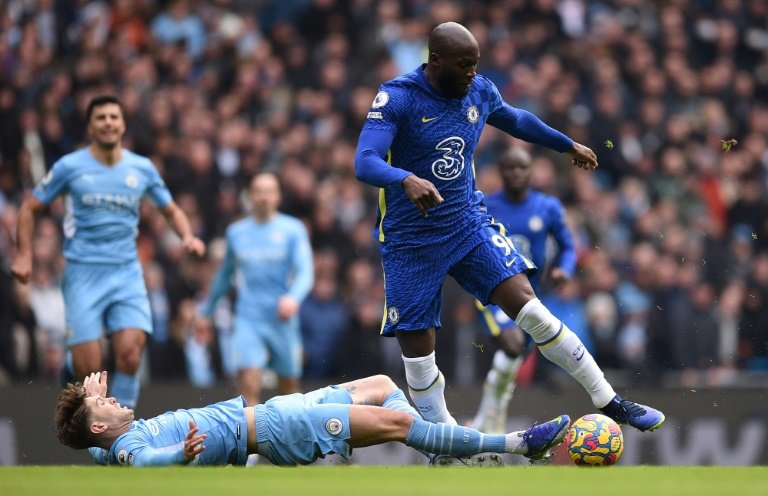 But he has scored just twice in his last 11 league appearances either side of being dropped for voicing his unhappiness at how the season has gone since a club-record £98 million move from Inter Milan to Italian media.

And Tuchel rejected suggestions the striker is starved of service.

"Sometimes he needs to do the service," added the German. "He had many ball losses without any pressure. He had a big chance.

"Of course we want to serve him but the performance up front, we have to do much better."

"We cannot forget who we played, they are European champions, and how incredible a side they are," said Guardiola. "They defended well, they waited for transition to punish us and we won from one transition."

City's one clear chance before the break came from a Chelsea mistake.

Mateo Kovacic's pass deflected off De Bruyne into the path of Jack Grealish, but the most expensive English player of all-time missed the chance to mark his biggest moment yet as a City player as his shot was turned behind by Arrizabalaga.

Lukaku has had a similar underwhelming impact to Grealish.

He had the chance to kickstart his season and the title race when he was picked out by Kovacic, but Ederson raced from his goal and made a fine save low to his right.

A top-of-the-table clash lacked the accompanying atmosphere for most of the match at a subdued Etihad.

However, the crowd were brought to their feet by a moment of genius as De Bruyne delivered what could be the knockout blow in the title race.

He held off the challenge of N'Golo Kante to spin onto Joao Cancelo's pass before picking out the bottom left-hand corner of Arrizabalaga's net.

"I got away from Kante at the right time. I was looking at the space and they were dropping off, I found the angle and it worked perfectly," said De Bruyne.

Chelsea were unable to offer any response as they chased City shadows.

Liverpool can cut the gap at the top to eight points should they win their two games in hand, but only a collapse will see City fail to retain the title now.

"Twelve victories in a row is incredible, so we must keep going," added Guardiola.

"My job is to take out of the heads of the players what people will say. We are more than pleased but there is a lot of a job to do."