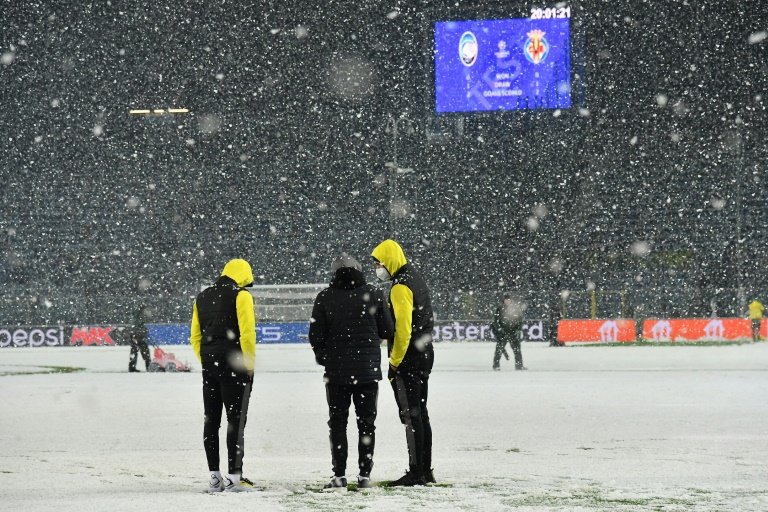 Atalanta's Champions League showdown with Villarreal has been postponed until Thursday evening due to heavy snowfall in Bergamo, the Italian club confirmed on Wednesday.

"Atalanta-Villarreal will be played tomorrow, Thursday 9 (December), at 19 CET (1800 GMT)," the Serie A outfit said in a statement.

Villarreal also confirmed the new kick-off time, although there was no official announcement from UEFA.

The time differs from initial reports in Italy which claimed UEFA were likely to reschedule the match for 16:30 local time.

"Due to adverse weather conditions, the referee, in conjunction with the UEFA delegate and the teams, has decided to postpone the match between Atalanta and Villarreal in Bergamo," European football's governing body said in an earlier statement.

A cold snap has swept across northern Italy, and ground staff at Atalanta's Gewiss Stadium were sweeping snow off the pitch in an attempt to make it playable.

However the icy conditions continued and the snow kept piling up on the pitch even as it was being pushed to the sidelines.

Atalanta sit third in Group F and must win the match to qualify for the last 16, while Villarreal only need to avoid defeat to qualify in second place behind Manchester United.

Atalanta were guaranteed at least a Europa League spot when Young Boys drew at Old Trafford on Wednesday to finish last in the group.

The news of the postponement was met with loud whistles from Atalanta fans in the stands and a flare was thrown on the pitch, while Villarreal's players applauded the small group of Spanish supporters shivering in the roofless away end.