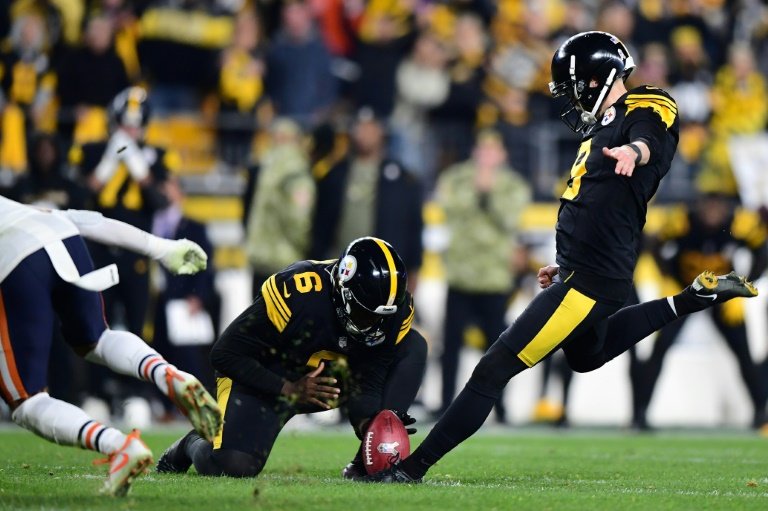 Chris Boswell booted a 40-yard field goal with 26 seconds left as the Pittsburgh Steelers extended their win streak to four games by coming from behind to squeeze past the Chicago Bears 29-27 on Monday.

Veteran quarterback Ben Roethlisberger combined with receiver Pat Freiermuth for two earlier touchdowns, setting the stage for Boswell's game-winning kick in front of a crowd of 68,400 at Pittsburgh's Heinz Field.

"It was a strange game, but it is fun," said Roethlisberger, who completed 21 of 30 passes without an interception. "I wish it wasn't so close. We made it a little stressful but I am proud of the guys."

The mistake-prone Bears seized their only lead of the contest on a 16-yard touchdown pass from rookie quarterback Justin Fields to Darnell Mooney with 1:46 remaining in the fourth quarter.

But Roethlisberger and the Steelers weren't willing to quit as they rallied to win and improve to 5-3 on the season.

Pittsburgh prevailed despite being outgained 414 yards to 280 and outscored 21-9 in the fourth quarter.

Chicago was penalized a season-high 12 times for 115 yards. The Bears suffered their fourth consecutive loss to drop to 3-6 after a promising start to the season.

Fields had the best offensive game of his first NFL season, passing for 291 yards with a touchdown and an interception.

This was the second straight week the Steelers have rallied for the win. Last week they came back to beat Cleveland 15-10.

Boswell missed the second half of that game with a concussion and didn't practise much with the team this week.

Bears coach Matt Nagy returned to the sidelines Monday following a one-game absence due to the league's Covid-19 health protocols.