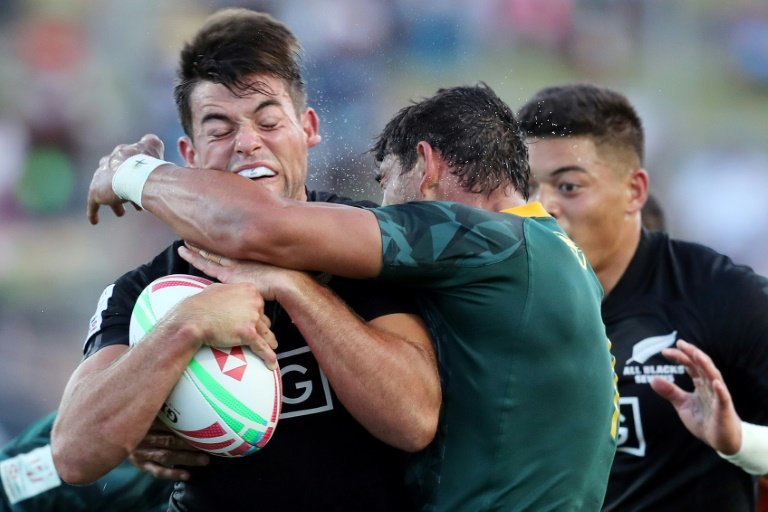 Rugby authorities need to implement enforceable laws to reduce head impact exposure or risk "players dropping out of the game at all levels", the head of an influential head injury foundation has told AFP.

Concussion in rugby and the fallout for players later in life have become high-octane topics.

World Rugby issued a set of recommendations in September that limit full contact training to 15 minutes a week and set a 40-minute weekly limit for controlled contact training.

The Drake Foundation's CEO Lauren Pulling said while the new limits were encouraging, there was a strong likelihood that they would not be widely implemented.

She said in football some coaches had already admitted they were not implementing limits brought in to restrict high-impact headers in training.

"Given this may well be the case in rugby too, we want to see enforceable laws imposed to reduce head impacts," Pulling said.

The Drake Foundation is a not-for-profit organisation committed to improving the health and welfare of people impacted by head injuries through scientific research.

Pulling was speaking ahead of the release of a study funded by her foundation and carried out the London School of Hygiene and Tropical Medicine, Queen Mary University of London and the Institute of Occupational Medicine and published in Alzheimer's and Dementia: The Journal of the Alzheimer's Association.

A positive finding in the study, called BRAIN, is that it finds no difference in cognitive function before the age of 75 between players in the pre-professional era (those who turned professional in 1995) with three or more concussions, and those with fewer.

The study team worked with 146 former elite rugby players in England aged 50 and over.

However, the results, coupled with a Drake study of current elite players and recent cases of brain disease in retired professional players, suggests the sport may have become more damaging to brain health since it turned professional.

"We don't have comparable data from the modern game so we do not have the full picture,"said Pulling.

"But we do know that in the modern game players are generally bigger, stronger and faster so there is more force on the brain in head impacts."

The study began several years ago, Pulling said, focusing on the over 50s as "this is generally when indicators of worsening cognitive function or neurodegenerative disease will be seen."

Additional research this month by Censuswide, via an online survey of 508 respondents in the UK involved in rugby union, will ring alarm bells for rugby authorities.

It found that 62 percent of adults who either play amateur rugby or have a child who plays rugby are concerned about the long-term effects of the sport on their or their child’s brain health.

Pulling said the findings are "quite stark".

"As much as we are concerned for the welfare of individual players, we are also concerned about the future of the sport and how many players might drop out of the sport altogether because of the risks around head injury."

Pulling -- who praised the RFU and Premiership Rugby for introducing brain clinics for retired players aged 30-55 which will also have a research arm -- said the benefits of sport were huge and the foundation was worried about "discouraging" participation.

"But we are concerned about brain health risk and so are parents and amateur players," she said.

"We would urge sports governing bodies to mitigate against this with increased education at all levels of the game and enforceable laws to reduce head impact exposure.

"Without urgent action, we could see players dropping out of the game at all levels."