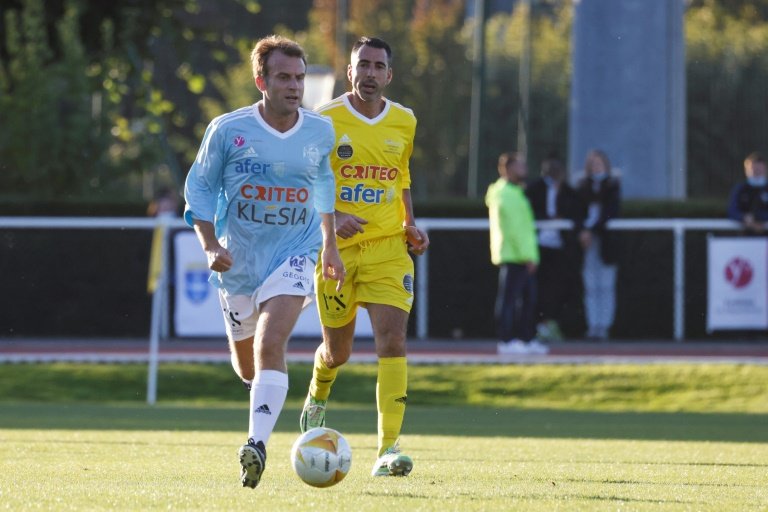 French President Emmanuel Macron, who has his eye firmly on the goal of elections next year, donned his football boots and marshalled the midfield at a charity match on Thursday.

After a kiss from his wife Brigitte, the 43-year-old was all smiles as he took to the pitch in Poissy outside Paris alongside former international defender Marcel Desailly and ex-Arsenal manager Arsene Wenger.

Playing central midfield, Macron drew cheers from the crowd with his first touch -- and was given plenty of space to turn from overawed opponents who retreated deferentially as he advanced with the ball.

The fan of Marseille was also allowed to take a penalty, scoring an equaliser with a less-than-ferocious shot that the political centrist sent straight down the middle.

Macron, who played football at university and is a keen tennis player, had spent the day visiting construction sites for the 2024 Paris Olympics.

"The aim is not simply to get medals, it will be to put sport at the heart of the nation," he told reporters, announcing 200 million euros ($232 million) for new sports facilities.

His political party and aides are gearing up for presidential polls next April when the head of state is expected to seek a second term.

A new survey published on Thursday showed him coming top in the first round with 24-28 percent of votes, and then winning the second round run-off.

The charity game featured a side of former players and public personalities, including former France international and Arsenal star Robert Pires, while their opponents were a team of medics who have been on the frontline of efforts to battle Covid-19.

Footage of the match, and Macron's successful penalty, were shown on rolling news channels.

The money raised from the sale of around 3,000 tickets was destined for a hospital charity which is headed by Brigitte Macron.

Macron is not the only world leader to take to the pitch in a bid to impress fans with his sporting prowess.

The vice-president of the South American state of Suriname, Ronnie Brunswijk, 60, set his sights higher -- last month, he had himself selected in attack during a competitive professional game for the club he owns.

The club, Inter Moengotapoe, suffered a 6-0 drubbing and has since been thrown out of the CONCACAF League.