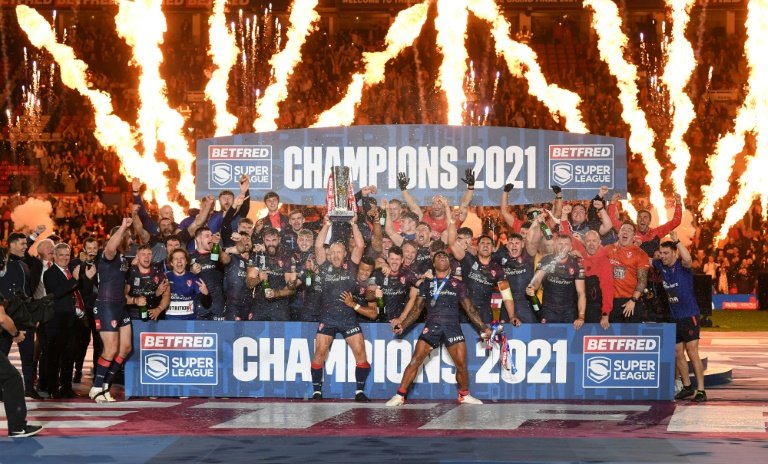 Kristian Woolf's team also completed the fourth domestic double in Saints' history after winning the Challenge Cup in July and ended the Dragons' dream of a maiden title.

Steve McNamara's Dragons had already made British rugby league history by breaking the dominance of its northern English heartlands.

The club from Perpignan, southern France, joined Super League in 2006 and became the first non-English team to win the Challenge Cup knockout competition in 2018.

This year, they topped the regular-season table to lift the League Leaders' Shield for the first time and became the first non-English team to reach the Grand Final.

But St Helens held their nerve in the final in Manchester to ensure there would be no fairytale ending for the Dragons.

"It was an outstanding game. There was drama, controversy and I'm extremely proud of this group," he told Sky Sports.

"They've had two coaches -- that says a lot about the group as well."

"We are going to go and celebrate this for the next couple of nights."

McNamara called Catalans' loss "heartbreaking" but vowed it was not the final chapter in their story.

"It's been a major step forward for the club but it's not the final step -- there's many more to take," he said.

St Helens dominated early on as Catalans' Sam Tomkins, who won the 2021 Man of Steel award for best player of the season, struggled to make an impression.

James Maloney gave the Dragons an early lead in his final game for the club with a 10th-minute penalty.

But Naiqama pierced the Dragons' defence and contorted his body to ground the ball past the line for St Helens.

Coote extended Saints' lead to four points with a 22nd-minute penalty before Maloney converted his second penalty in the 28th minute to cut the deficit as St Helens led 6-4 at half-time.

Saints were reduced to 12 men after Tommy Makinson was sin-binned for a try-saving high tackle on Fouad Yaha.

The Dragons made their numerical advantage count in the 50th minute when Saints failed to defend a high ball and Mike McMeeken dotted down.

But Naiqama, who will leave St Helens to spend more time with his family in Australia, scored a decisive second try.

He latched on to Lomax's kick in the 66th minute, with Coote's conversion putting St Helens 12-10 in front with 13 minutes remaining.