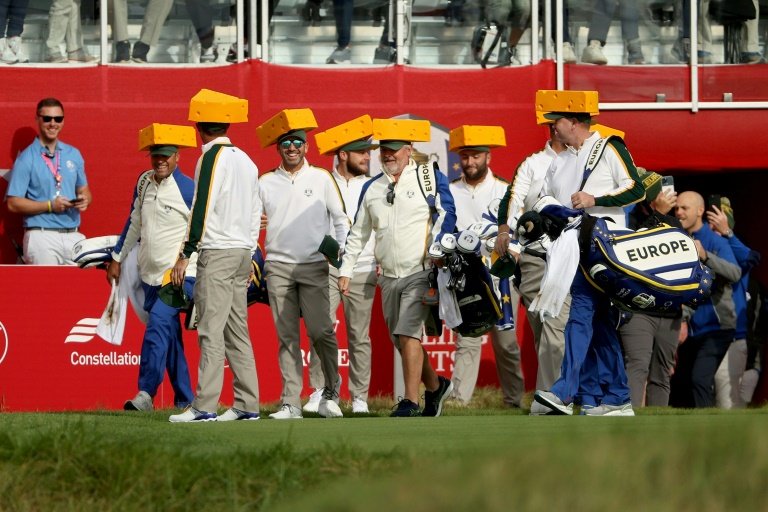 Europe launch their Ryder Cup title defense in hostile territory on Friday, but on Wednesday they found a way to get on the good side of the home side's fans.

"A bit of fun," European captain Padraig Harrington said after his team emerged for a practice round at Whistling Straits sporting the green and gold colors of the NFL's Green Bay Packers along with the foam rubber "cheesehead" novelty hats beloved of Packers fans.

"Look, it's lighthearted. You want it that way in practice," Harrington said, adding that the Packers, whose Green Bay base is some 60 miles north of the Whistling Straits course on the shore of Lake Michigan in Wisconsin, "were very much on board" with the idea.

"Everybody is out here to get on well with the crowds," Harrington continued. "We obviously can't sign autographs this week with Covid, which is something that traditionally we would do.

Things could be very different come Friday, when the three day match play clash begins. Up to 45,000 fans are expected daily, and Europe will be out to break the hearts of most of them.

England's Lee Westwood, prepping for his 11th Ryder Cup appearance, said the Europeans understand that with coronavirus travel restrictions still biting the vast majority of fans on site will be backing the Americans.

"You just have to deal with it," Westwood said. "I'd much rather play in front of a crowd that's solely US fans than no crowd at all like we experienced last year."

That was the note sounded by all the Europeans, despite the fact that the partisan nature of the Ryder Cup, and the tacit suspension of golf's "Quiet, please" rules of spectator etiquette, has sometimes led to over-the-line heckling.

"This is different this week," Westwood said. "This is more like a football game or a basketball game where people have picked a side and you cheer for your side, which I enjoy it. That's what the Ryder Cup is all about." 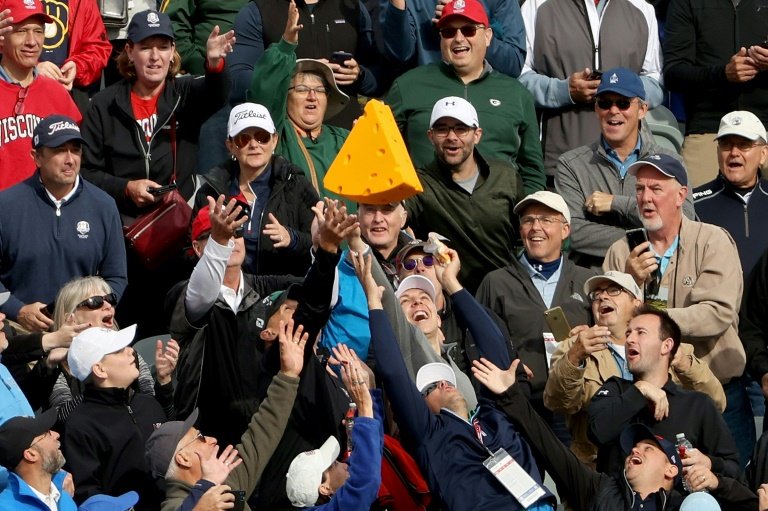 Making friends: Ryder Cup fans try to catch a cheesehead hat tossed by one of Europe's players during a practice round at Whistling Straits / © GETTY IMAGES NORTH AMERICA/AFP

Europe basked in the vocal adoration of thousands on the way to a 17.5-10.5 victory over the United States at Le Golf National near Paris in 2018.

At 2016 at Hazeltine in Minnesota, the Americans notched their lone victory in the past five editions to the soundtrack of unruly -- in some cases abusive -- home fans.

Northern Ireland's Rory McIlroy, a fan favorite when he plays on the US PGA Tour, came in for heavy heckling at Hazeltine, eventually having one spectator who "took it a bit too far" removed.

But that didn't stop him welcoming on-site fans for the Ryder Cup, which organizers postponed for a year rather than play without spectators.

"I just think it makes it a greater spectacle," McIlroy said. "There were talks of having the Ryder Cup last year with limited fans or no fans, and my argument was it wouldn't be a Ryder Cup at all. 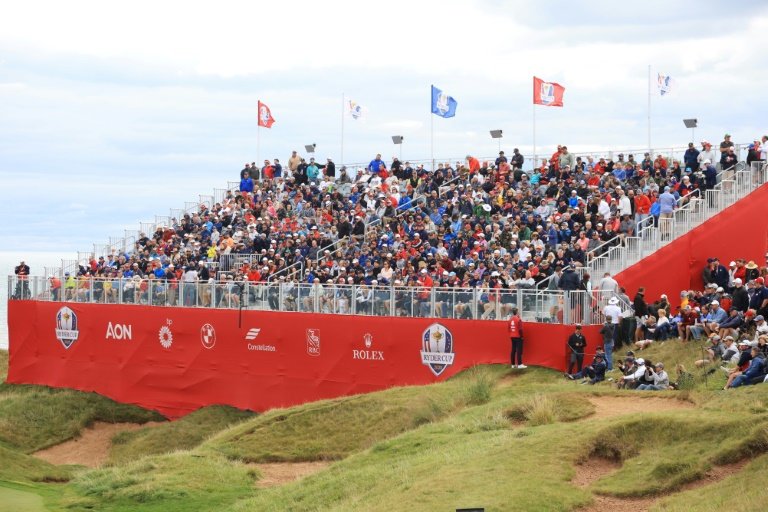 Loud and rowdy: The 43rd Ryder Cup at Whistling Straits is expected to draw up to 45,000 fans a day / © GETTY IMAGES NORTH AMERICA/AFP

"It probably would have been to the European team's benefit to not have that, but it's not a Ryder Cup then."

European veteran Ian Poulter said fans had been "brilliant so far" in welcoming the Europeans, despite their obvious backing of the home side.

US captain Steve Stricker, a Wisconsin native who has previously captained a victorious American Presidents Cup team, said the hosts were hoping for "loud, pro-US" fans.

"But we're also hoping they don't cross the line, which we've seen at some other Ryder Cups throughout the years," Stricker said. "Yeah, I expect good rowdy fans. We need that backing. It is our home turf."