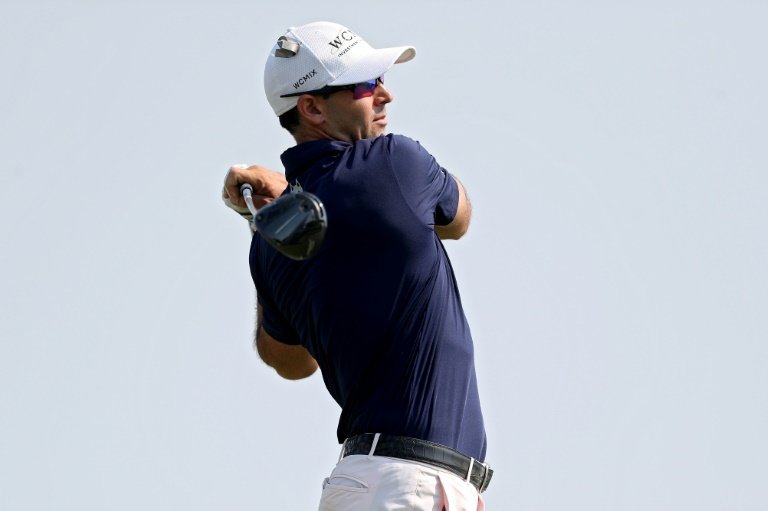 American Cameron Tringale plays his shot from the 18th tee during the third round of the 3M Open in Blaine, Minnesota / © GETTY IMAGES NORTH AMERICA/AFP

Cameron Tringale fired a five-under par 66 to take a one shot lead at the 3M Open, where an onerous par-five 18th hole provided extreme moments of grief and frustration for the PGA field Saturday.

Tringale sank a short putt for par on 18 to move into first place on the leaderboard at 12-under 201 and grab a slim lead over fellow Americans Gary Woodland and Maverick McNealy.

The 33-year-old Tringale, who is seeking his first win on the PGA Tour, eagled the par-five 12th in a bogey-free round.

The finishing hole at the Twin Cities golf course is ranked the most difficult par five on the Tour and features a mini-lake at the front that swallowed countless golf balls this week. There were three double bogeys and seven triple bogeys on 18.

McNealy shot a bogey-free 68 and Woodland birdied five of six holes in one stretch on the front nine in a 67, as there are 28 players within five shots of the lead heading into Sunday's final round.

South Africa's Charl Schwartzel (68) and Roger Sloan (70) of Canada were in an eight way tie for four, two shots adrift of Tringale.

Beau Hossler (65) was three strokes back, with three others at nine under.

Kevin Mitchell made a record-tying seven consecutive birdies to begin his round on the back nine, joining Juan Sebastian Munoz (2020), Brandt Snedeker (2007) and Joe Durant (2005). Mitchell finished with a 66 on the day.

American Rickie Fowler also got off to a hot start with six birdies on his first 10 holes, but stumbled to the finish with a triple bogey on the treacherous 18. He is tied for 29th.