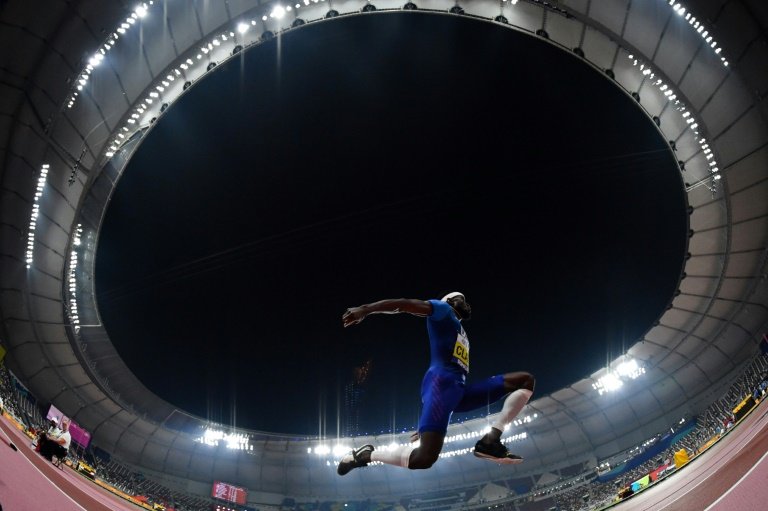 Will Claye says the darkest moment of his life could ultimately lead to the greatest achievement of his career.

In January last year, the US triple jumper was facing up to the grim prospect that his chances of competing at a third Olympics were over.

But the intervention of Covid-19 -- and the subsequent one-year postponement of the Tokyo Games -- revitalised an Olympic dream that had looked doomed.

"This extra year was a huge blessing for me," Claye said. "It's terrible it was under the circumstances that it was.

"I knew we were going through the pandemic but it was a huge blessing. I had the opportunity to get back to feeling like myself.

"Last year I was probably in the darkest moment of my life. I wouldn't have been in Tokyo in 2020."

Another twist of fate during the pandemic postponement has also worked in Claye's favour.

In May, reigning Olympic and world champion Christian Taylor, the undisputed king of the event, was ruled out of Tokyo after suffering the same Achilles injury that had once threatened to sideline Claye.

It means that Claye -- a silver medallist behind Taylor at the 2012 and 2016 Games -- is now the gold medal favourite in Tokyo.

Claye's story is by no means unique. Several US athletes say the postponement of the Olympics granted them precious time to reassess and redirect their careers.

For some, the delay meant an opportunity to regain full fitness, either from injury or illness.

For other athletes, the postponement provided a window to fine-tune technical aspects of their craft.

McLaughlin, a silver medallist behind Dalilah Muhammad at the 2019 World Championships in Doha, joined famed coach Bobby Kersee in 2020, a move she doubts would have been possible without the postponement.

"I was just grateful for the time to be able to sit down and look back at my season in 2019 and make some decisions and choices that if the Olympics had happened last year that I probably wouldn't have been able to make," McLaughlin said.

Under Kersee, McLaughlin rebuilt her stride pattern for the hurdles, aiming to go from 16 to 15 or 14 between each hurdle while learning to lead with either leg. McLaughlin's decision to switch coaches has already paid off.

In June, she stormed to victory at the US trials in Oregon, beating rival and 2016 Olympic gold medallist Muhammad in the process, with a world record time of 51.90sec.

"I'm really grateful for the time even though the situation is unfortunate," McLaughlin said.

It has been a similar story for US hammer thrower DeAnna Price.

Price said the postponement gave her a chance to experiment with technical tweaks following victory at the 2019 world championships she would not otherwise have attempted had the Tokyo Games taken place as scheduled.

She also was able to make changes to her diet after discovering that she suffered from celiac disease, low iron and milk sensitivity.

"2020 was a year where I learned a bit more about my body and what it can do and how I can apply better technical aspects into my throwing," Price said.

"It was hard but it was a great learning experience and I don't know if I would have been able to make it in 2020."

Those adjustments have enabled Price to make serious improvements to her personal best.

In June she threw a new US record of 80.31m, making her only the second woman ever after Poland's Anita Wlodarczyk to break the 80-metre barrier.