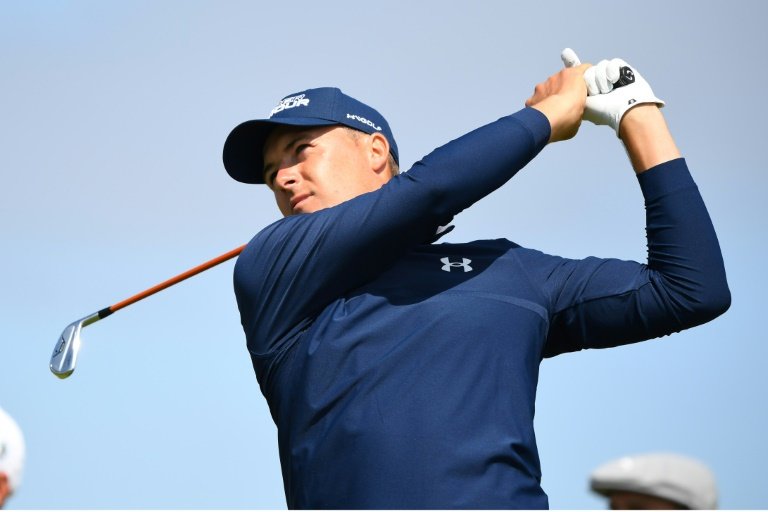 Jordan Spieth savoured a return to normal among the "best fans" in golf after posting an impressive five under par 65 in the first round of the British Open on Thursday.

For Spieth, the combination of his own form and the support from a crowd of up to 32,000 spectators made for a welcome return after the 2020 edition of golf's oldest major championship was cancelled because of the coronavirus pandemic.

"I've played well here, whether I've come in in form or not.

"Now we're back, and it feels -- actually inside the ropes when we teed off on the first tee forward, it feels the most normal of any tournament I think that we've played thus far relative to that same tournament in previous years pre-Covid."

The 27-year-old added: "The fans are fantastic here. They're just the best in golf -- very knowledgeable, and you always know where your ball is even if it's a blind shot.

"It was really great to have them back and have what feels like normalcy when we teed off on the first hole."

Amid concerns many golf tournaments are now dominated by power hitting, Spieth said he enjoyed the challenge of a British Open, a championship staged on a seaside course where changing wind conditions put the emphasis on a golfer's shot-making ability.

"I think it brings a lot of the feel aspect into the game," he said.

"You get less swing-focused and more shot-focused over here because the second you take your brain off of what you're hitting, you may not find your ball.

"Instead of just a driving range shot in Palm Springs, there's always some shot you have to play that gives you a little bit of an advantage or certain club selections based on you hitting a fade or a draw."

Spieth won three majors in two years from 2015-17, a purple patch that included the Masters and US Open titles as well as his Claret Jug triumph.

He went nearly four years, without a tour victory of any kind, however, until triumphing at the Texas Open in April.

But having finished in a tie for third place at this year's Masters, a tournament he felt he "very well could have won" but for some errors in the opening rounds, Spieth said: "I feel really good about my chances going forward, as good as they have been historically.