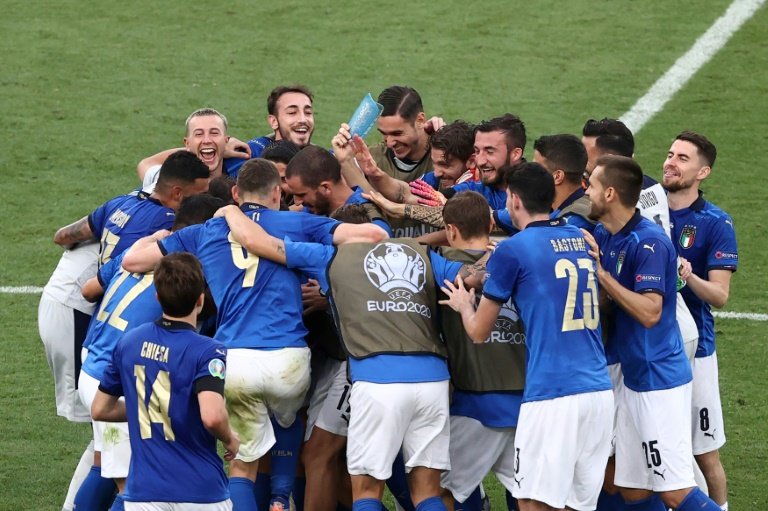 Roberto Mancini has turned the clock back for Italy, recapturing the atmosphere of the 1990 World Cup the country hosted, with a 1-0 win over Wales capping a perfect Euro 2020 group-stage run.

Three years after taking over following Italy's failure to qualify for the World Cup for the first time in 60 years, Mancini has lead the Azzurri back to centre stage in emphatic fashion.

All Italy's group matches have been played in Rome's Stadio Olimpico.

And the song "Notti magiche" (Magical Nights) popularised during their home World Cup 31 years ago when Italy reached the semi-finals rang out among the thousands of fans who were both delighted to rediscover their all-conquering national side and return to the stands after over a year away because of the pandemic.

After a perfect European qualifying run, Italy have continued that form in the group stage, beating Turkey and Switzerland, both with a 3-0 scoreline, before the victory over the Welsh sealed top spot in Group A. It was an 11th consecutive victory without conceding a goal.

"It brought us back a few years when we were all younger and we felt an extraordinary love for the national team.

"This is why I want to dedicate this victory to them."

He added: "We say Ciao Roma and thank them for what they have done."

Matteo Pessina's goal before half-time means Italy will play the runner-up from Group C, either Austria or Ukraine, at Wembley, where the semi-finals and final will also be hosted.

"I'd like to resemble one of the coaches who won the World Cup," said Mancini, who has been in charge of four-time world champions Italy for 35 games.

"Pozzo won many other important things. We are still behind."

Another record beckons -- a 12th consecutive victory. That was achieved by Ferruccio Valcareggi, who led Italy to their only European title in 1968, and a runners-up spot in the World Cup two years later.

Mancini brought in fresh legs against the Welsh, with eight changes from the Swiss game, but the outcome was the same as a side with an average age of 27 again dominated their rivals.

Marco Verratti returned to midfield from injury and proved decisive, setting up 24-year-old Pessina for his first competitive international goal in his seventh appearance for Italy, having scored two others in friendlies.

Midfielder Federico Chiesa also got his first start in this Euro 2020 and earned the man of the match award.

"We are ready to dream big. We've all the options in hand," said the 23-year-old Juventus player.

"The best is yet to come. It's great to play at Wembley. But our goal is to return to London after the last 16.

"We've given the coach a lot of headaches about who to field. We have 26 players on the team who can start." 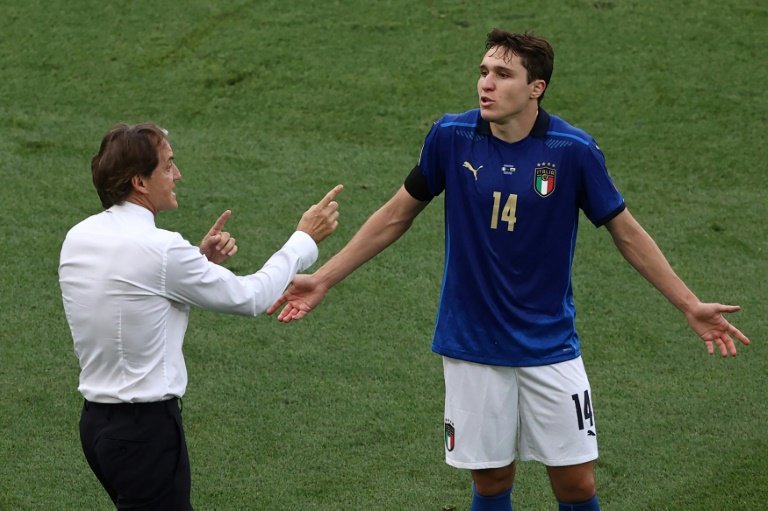 Mancini conceded the run had been perfect as Italy matched their unbeaten group runs in three previous world and European tournaments in 2000, 1990 and 1978.

"Changing even one or two players doesn't change anything because everyone knows what they have to do and the product does not change."

Italy's home advantage also helped with rivals Wales, who also reached the next round after playing their first two group games in Baku.

The Welsh are now preparing for a last 16 game in Amsterdam on Saturday, although coach Robert Page questioned the wisdom of having venues spread across the continent.

"On paper it sounds a great idea," Page said, "but logistically it's a nightmare and with Covid on top of that, it just makes the job harder."