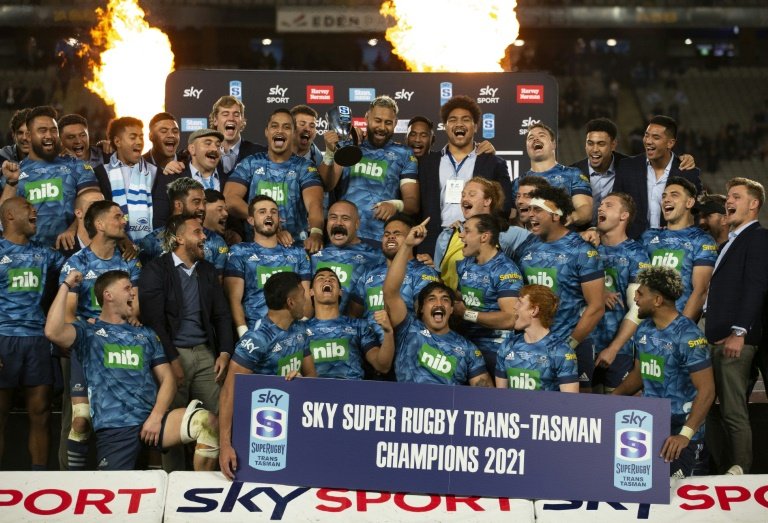 A late Blake Gibson try ensured the Auckland Blues ended an 18-year title drought when their All Blacks-stacked forward pack orchestrated a 23-15 victory over the Otago Highlanders to claim the Super Rugby Trans-Tasman crown on Saturday.

The all-New Zealand final to the Australasian championship was an intensely physical battle with the Blues possessing too much firepower up front where they rolled over the Highlanders at the breakdown and controlled nearly 66 percent of possession.

However, the Blues' ill-discipline allowed the underdog Highlanders to land three penalties in seven minutes to snatch a 15-13 lead with 12 minutes remaining.

When an upset appeared possible, the Blues forwards won crucial penalties to first regain the lead with a Harry Plummer penalty and then seal the outcome with a converted try to Gibson with two minutes remaining.

Before a crowd of 36,000, and on a calm night after a tornado swept through Auckland leaving a trail of destruction earlier in the day, the Blues secured their first silverware since they won their third Super title in 2003.

Since then they have been regarded as under-achievers and were again in danger of losing a crunch match until Gibson's late heroics.

"I don't score many tries and normally don't show any emotion as well but that felt pretty good," an ecstatic Gibson said.

"The boys showed a lot of grit especially in the second 40 and luckily we scored that try because I wouldn't want to have been defending the line in the last couple of minutes."

Flanker Dalton Papali'i, one of six All Blacks in the Blues pack, said it was a relief to end the championship drought.

A Mitch Hunt penalty gave the Highlanders an early lead before the Blues hit the front with a try to left wing Mark Telea who latched on to a well-placed cross-kick from flyhalf Otere Black.

Black, who landed the conversion, required treatment for a head knock soon after which resulted in a yellow card for Highlanders skipper Ash Dixon to mar his 100th game for the club.

While the Highlanders were down to 14 men, Plummer and Hunt traded penalties for the Blues to lead 10-6 before Black returned after passing his head injury assessment to land a further penalty for the Blues on the stroke of half-time.

Although the Highlanders spent much of the second spell struggling to get out of their own half, the Blues squandered scoring chances when Black missed a close range penalty and Hoskins Sotutu lost the ball on the line.

At the three-quarter mark, and in a rare foray over the half-way line, the Highlanders punished the Blues with two penalties to Hunt and a long-range effort by Josh Ioane to hit the front.

But they were unable to hold on as the Blues produced 10 points in the closing 10 minutes.