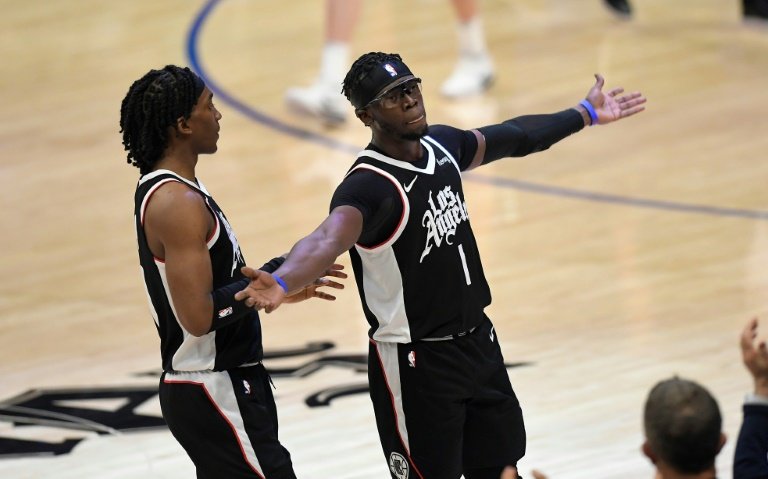 Terance Mann poured in a career-high 39 points as the Los Angeles Clippers advanced to their first NBA semi-finals in franchise history, rallying to beat the top seeded Utah Jazz 131-119 on Friday.

They stormed back in the second half on Friday after being down by 25 points in the third quarter to reach the league's final four, ending years of playoff frustration including a string of NBA quarter-final exits.

The 24-year-old Mann was electric in just his second career playoff start, shooting 15-of-21 from the field and draining seven of 10 three pointers in front of a crowd of 17,100 at Staples Center arena in downtown Los Angeles.

"I just trust my work," said Mann. "Everybody was telling me to shoot the ball and that is what I did."

They next face the Phoenix Suns in game one of the Western Conference finals on Sunday.

Second year player Mann got plenty of help from the veterans on the team. Paul George scored 28 points and added nine rebounds and seven assists for the Clippers, who won despite missing their top player Kawhi Leonard.

"It feels great," said George. "They wrote us off when Kawhi went down.

"He is one of the best young players I have been around," George said of Mann, whose previous regular season high was 25 points. "He reminds me a lot of myself."

The Clippers made history without star Leonard, who missed his second straight game with a sprained right knee.

The Jazz got star guard Mike Conley back on Friday but it wasn't enough to salvage their series. Conley finished with five points in 26 minutes of playing time.

Donovan Mitchell, who was playing with a sore ankle, scored a team high 39 points, dished out nine assists and had nine rebounds for the Jazz.

"At the beginning of the third we started turning the ball over and that got them going," said Jazz coach Quin Snyder. "We were late on our rotations and they took advantage of that."

Elsewhere, Joel Embiid and the Philadelphia 76ers played with more urgency, using a collective offensive effort to come from behind and force a game seven in their second-round NBA playoff series.

"You saw the fight and grit of a whole group," said Harris.

Game seven will be Sunday at the home arena of the top-seeded 76ers.

Philadelphia's win means both Eastern Conference semi-final series will go to a game seven after the Milwaukee Bucks won game six against the Brooklyn Nets on Thursday night. 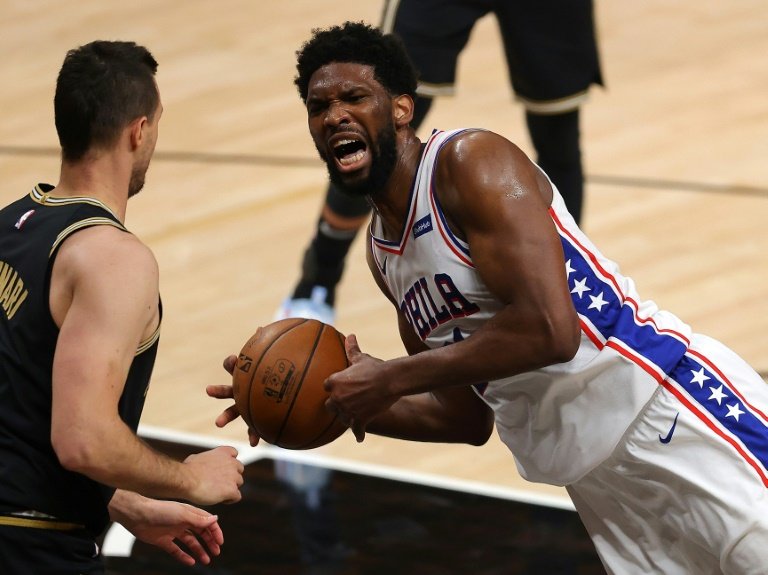 Philadelphia 76ers' Joel Embiid, right, reacts as he falls to the floor prior to being charged with an offensive foul while driving into Clint Capela of the Atlanta Hawks / © GETTY IMAGES NORTH AMERICA/AFP

The 76ers pushed the best-of-seven series to the limit after the heartbreak of letting two potential wins in games four and five slip through their fingers.

"It's fun. It's a lot of fun," Curry said. "You've just got to weather the storm and come back at them at the other end."

Tyrese Maxey added 16 points and seven rebounds off the bench for the 76ers, who rebounded after blowing a 26-point lead at home in game five.

Trae Young finished with 34 points and 12 assists for Atlanta, who are seeking to reach the Eastern Conference finals for the first time in six years.

Philadelphia led 80-76 at the end of the third quarter.