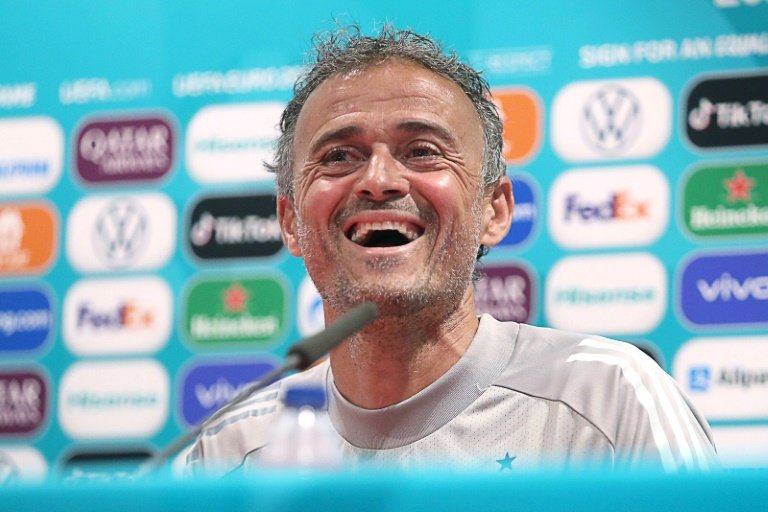 Luis Enrique has said there will be "no excuses" for Spain at Euro 2020, despite positive Covid-19 tests derailing their preparations for Monday's Group E opener against Sweden.

Spain captain Sergio Busquets is still self-isolating at home while defender Diego Llorente was only allowed to rejoin the group on Saturday after giving a fourth consecutive negative test.

Luis Enrique's training plan was thrown into disarray last week, with the squad training individually and the last friendly against Lithuania passed over to the under-21s.

The team were allowed to come together again on Saturday, at their training base in Las Rozas in Madrid and, on Sunday, at La Cartuja stadium in Seville, where they begin against Sweden.

"About a year ago I talked to the players and told them we were going to have a very clear of idea of how to play," Luis Enrique said in a press conference on Sunday.

"We have had to change a little, we don't have our captain here, Busquets, and we would have loved to have him, but we adapt.

"It's been a tough week, without doubt, but no complaints, no excuses. We have a great squad and we are excited for the first game tomorrow."

The Spain squad was vaccinated by the Spanish army in Madrid on Friday and Jordi Alba allayed fears the players could feel side-effects before or during the match.

"We are all perfect," said Alba on Sunday. "All good, luckily. We are in good spirits."

Alba, who looks set to step in for Busquets as captain, admitted training individually has been "more boring" but insisted "the players know what the boss wants us to do".

He said they have been focusing on physical work, which had not been greatly affected.

The conditions could be unforgiving for anyone feeling below-par, given temperatures in Seville could reach 30 degrees Celsius on Monday night.

But Spain's players will be used to the heat and Luis Enrique has been timing recent sessions in Madrid to be at the hottest time of the day to ensure they are prepared.

"The heat is a factor but in Madrid it has been very hot," said Luis Enrique. "It's not incredibly hot here so I think we should be able to play at a decent tempo."

Luis Enrique has rotated his team a lot during his three-year tenure and results have been inconsistent.

Alba and Busquets remain from Spain's Euro success in 2012 but Luis Enrique is attempting to launch a new era, with the aim to end the nine-year wait for a quarter-final at a major tournament.

Luis Enrique was asked if they are ready to challenge again. "I'd love that and I'm convinced that is the case," he said.