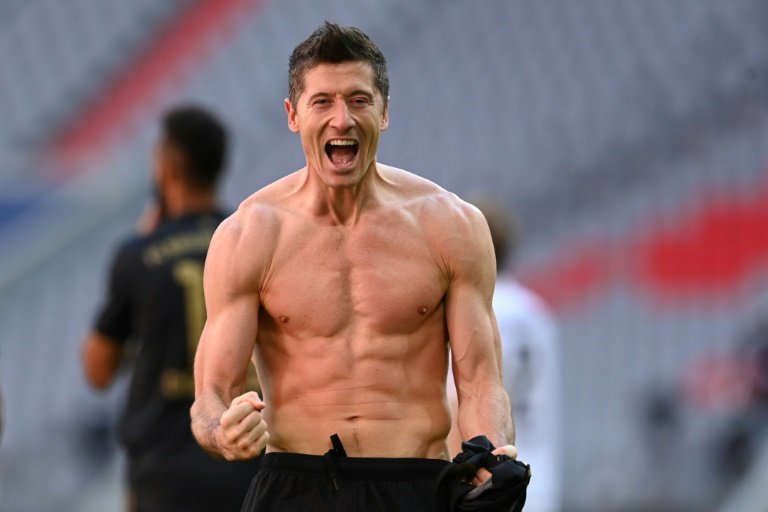 Bayern Munich striker Robert Lewandowski said it felt like being in a "science fiction film" as he scored his 41st Bundesliga goal of the season on Saturday to break Gerd Mueller's 49-year-old German league record for a single campaign.

Lewandowski scored in the 90th minute of Bayern's 5-2 home win over Augsburg having equalled Mueller's record of 40, which was set in 1971/72, last weekend.

Lewandowski broke Mueller's mark with a classic poacher's effort, rounding the Augsburg goalkeeper to fire home having snapped up the rebound after Leroy Sane's shot was parried just before the whistle.

"You wait for 90 minutes and then it comes in the last few seconds," Lewandowski told Sky.

"It was like being in a science fiction film. I've lost my voice.

"I saw Leroy shoot for goal, I had to keep believing and luckily it came off."

They finished the season 13 points clear in the table.

"I was a little bit disappointed to have not scored sooner, but sometimes such records have to be fought for," added Lewandowski.

"I was patient and believed until the end. I thank my team, who share the record with me."

It was the last game for Bayern head coach Hansi Flick, who will be replaced by Leipzig boss Julian Nagelsmann next season having won seven titles over the last 18 months.

At the other end of the table, Werder Bremen were relegated on the last day of the season after 40 years in Germany's top flight.

Cologne's 1-0 home win over bottom side Schalke meant automatic relegation for Bremen, who were thumped 4-2 at home to Moenchengladbach.

This is Bremen's first relegation since 1979/80 before coming back up the following season.

Union Berlin qualified for the new Europa Conference League play-offs finishing seventh in the table with a shock 2-1 win over second-placed RB Leipzig.