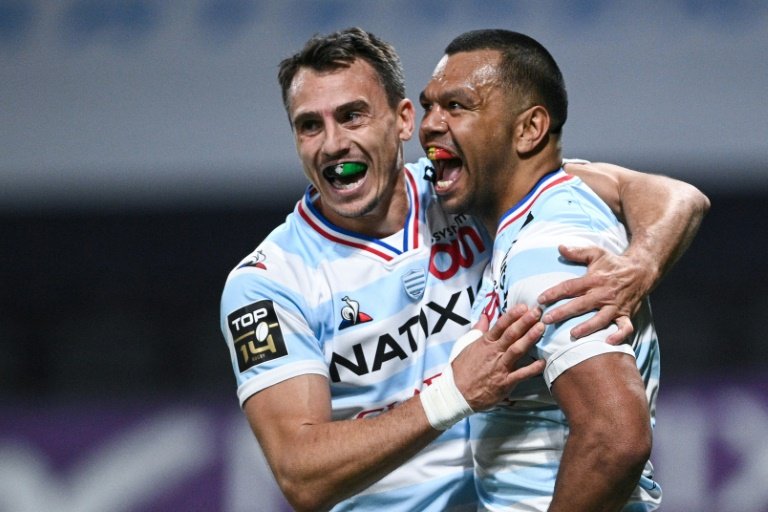 Australia full-back Kurtley Beale said Saturday's 45-19 win over Clermont was "important" in their hunt for the Top 14 play-offs as he scored two tries and set up another to send his side third.

Beale's efforts came within two minutes of each other in the first half as the Parisians moved above the visitors thanks to the bonus point, with three games left of the regular season.

"It was important to have that win tonight because it puts us in a good position to go further in the competition," Beale said.

"I'm still kind of starting to find my place. As a team it was a great opportunity to press forward."

Beale, 32, who made the last of his 92 Wallabies appearances at the 2019 Rugby World Cup said he had yet to speak to coach Dave Rennie about a Test return.

"I've had not contact back home but that's OK. I'll keep working hard here with Racing," he said.

"I'm very blessed to be at a special club with some special players and I will keep working hard and hopefully I will be able to put my best foot forward when the time is right," he added.

Travers' Clermont counterpart Franck Azema, who will leave after 11 years at Stade Marcel-Michelin at the end of the season, handed a first Top 14 start to 18-year-old Australian lock Miles Amatosero.

Clermont scrum-half Morgan Parra opened the scoring after seven minutes before Beale's quick-fire double at the Paris La Defense Arena, which has also been used as a vaccination centre since Monday.

The former Waratahs playmaker benefitted from a lovely Teddy Thomas break for his first before taking his tally for six tries in 19 games this term from a Finn Russell pass less shortly after.

Racing led 31-19 at the break as Thomas and Kevin Le Guen crossed with Fiji prop Peni Ravai responding for Clermont.

Beale turned the provider in the second half, freeing France centre Gael Fickou for his first Racing try since joining from Stade Francais last month.

Winger Donovan Taofifenua also scored as Scotland's Russell kicked the conversion two days after he was named in the British and Irish Lions squad for the summer's tour to South Africa.

With eight minutes left Russell left the field for a head injury assessment after a tackle on the away side's Japan full-back Kotaro Matushima and failed to return to the field.

"He's alright," Beale said of Russell. "I think he just wanted a rest for 10 minutes at the end."

European Champions Cup finalists La Rochelle have made 15 changes from last weekend's win over Leinster for the trip to Montpellier.

In the final game of the day Toulon host the other side in the May 22's showpiece continental match, Toulouse.