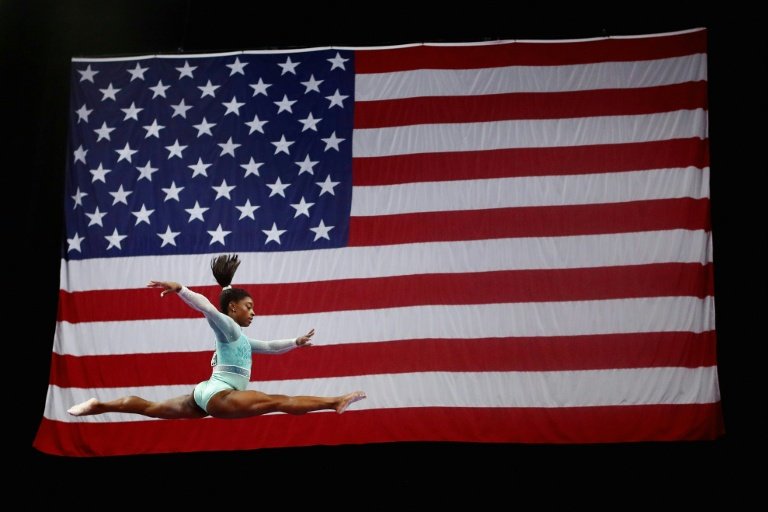 US gymnastics superstar Simone Biles said Wednesday she may reconsider her decision to retire after this year's Tokyo Olympics, hinting she could yet compete at the 2024 Paris Games as a specialist.

The reigning world and Olympic all-around gymnastics champion, regarded by many as the greatest gymnast in history, had previously said she plans to hang up her leotard after Tokyo.

However speaking to reporters at the US Olympic and Paralympic Committee's virtual media summit, she said her French coaches Laurent and Cecile Landi, had persuaded her to keep her options open.

"Right now my main focus is Tokyo," Biles said. "After that I have a tour that we've put together around the US. I'm really excited to do that.

"Afterwards, I'm not so sure. Cecile and Laurent are from Paris, so they've kind of guilted me into coming back as a specialist. But the main goal is the Olympics first, then the tour, and then we'll have to see."

The 24-year-old had initially vowed to retire after Tokyo, telling the BBC in a 2019 interview that her body would not be able to stand the punishment of another Olympic cycle.

"I am in pain most of the time ... I definitely plan for the Tokyo Olympics to be my last," Biles said.

"I feel like my body's gone through a lot and it's kind of just falling apart - not that you can actually tell but I really feel it a lot of the time."

On Wednesday Biles said while the postponement of the Olympics last year had been a disappointment, she was determined not to let years of preparation go to waste.

"It's another year on the body, it's just a lot to think about. But then at the end of the day we've worked so hard, we're going to keep striving for this goal. Once it was postponed it was, like, I've gone too far to give up now.

"It's been my goal for a while and I wasn't ready to hang that up just because of quarantine and the postponement."