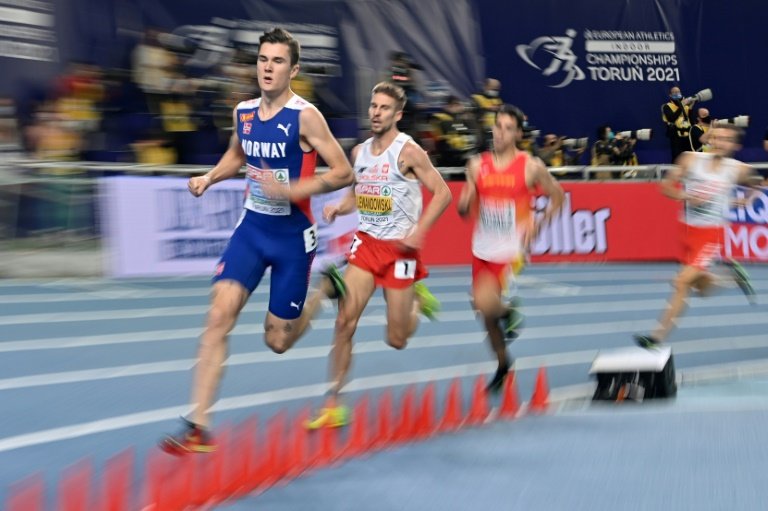 Nafissatou Thiam added the European indoor pentathlon crown to her Olympic heptathlon gold in Torun on Friday, but there was drama as track prodigy Jakob Ingebrigtsen was initially disqualified after crossing the line first in the men's 1500m only to be reinstated as the winner.

Ingebrigtsen, who set a European indoor record of 3:31.80 in Lievin, France, last month, the fifth fastest time ever run over the distance, crossed the line first in a thrilling near gun-to-tape race.

But the 20-year-old, a two-time European outdoor gold medallist (1500m and 5000m in 2018 at the age of 17), was disqualified for having stepped off the track into the infield, a decision that appeared to hand Polish veteran Marcin Lewandowski a fourth European indoor title, three coming in the 1500m in consecutive championships.

The 33-year-old clocked at time of 3:38.06 ahead of Spanish duo Jesus Gomes and Ignacio Fontes.

The Norwegians, however, swiftly lodged a protest which was ultimately upheld.

Ingebrigtsen was adamant he had not broken any rules, saying he had been "pushed to the inside of the curb" during a frenetic start to a race featuring 13 runners.

“The rules are on my side, there is a paragraph saying if you're pushed to the inside of the curb and it's not your fault, it’s okay," said Ingebrigtsen, who will now attempt to become the first male runner in European indoor history to complete a 1500m and 3000m double.

"I don't feel I've done anything wrong, there were just too many runners in the race," he said.

"None of us was trying to shove the other one, it just happened when too many other guys were coming from the outside.

"I simply wanted to win the race. But I knew a disqualification was coming."

Reigning Olympic heptathlon champion Thiam was the dominant force in the five-discipline pentathlon.

The 26-year-old Belgian was fifth fastest in the opening 60m hurdles in 8.31sec, before registering 1.89m in the high jump and 15.15m in the shot put, both leading marks. 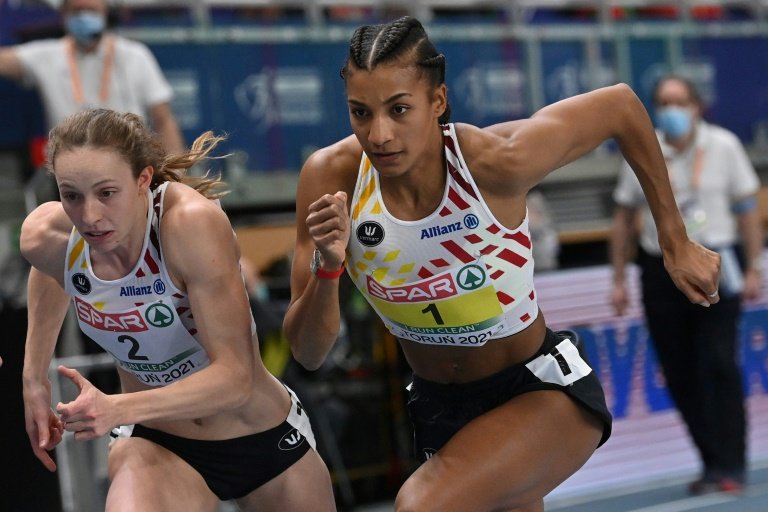 In the evening session, Thiam leapt a personal best of 6.60m in the long jump, but 2014 world indoor champ Nadine Broersen of the Netherlands came a cropper with three fouls.

That left just the 800m as the final event of a gruelling day of competition. Thiam made no mistake, timing a personal best of 2:18.80 for a national record total of 4904 points.

Thiam, the 2017 world heptathlon champion, had to make do with silver in Doha behind Katarina Johnson-Thompson in 2019, but her British rival is skipping the indoor season as she recovers from injury in a bid for a second dethroning of the Belgian at the Tokyo Olympics.

"I am really happy to be already that good," Thiam warned after her gold in Torun. "I surprised myself in the shot put and the long jump.

"Last year I trained a lot and worked really hard. That is what made the difference today. I am really happy with the national record because I never prepare specifically for the indoor season."

The first gold of the competition went to Portugal's Auriol Dongmo, who won the women's shot put with a winning 19.34m.

It was Dongmo's first global medal for Portugal, having previously won two African titles for her native Cameroon and only having had her eligibility transferred in May 2020.

Miltiadis Tentoglou of Greece sailed out to 8.35m on his first -- and only valid -- attempt, enough to defend his men's long jump title by 4cm from Sweden's Thobias Montler.

The Euro indoors will be denied, however, a pole-vault showdown between Sweden's world record holder Armand 'Mondo' Duplantis and Renaud Lavillenie after the Frenchman pulled out with an injured calf.

The 34-year-old Lavillenie sustained the injury in a training session earlier Friday, saying he had taken the "very tough decision" to withdraw "so as not to worsen the injury and risk compromising the Olympic Games this summer".