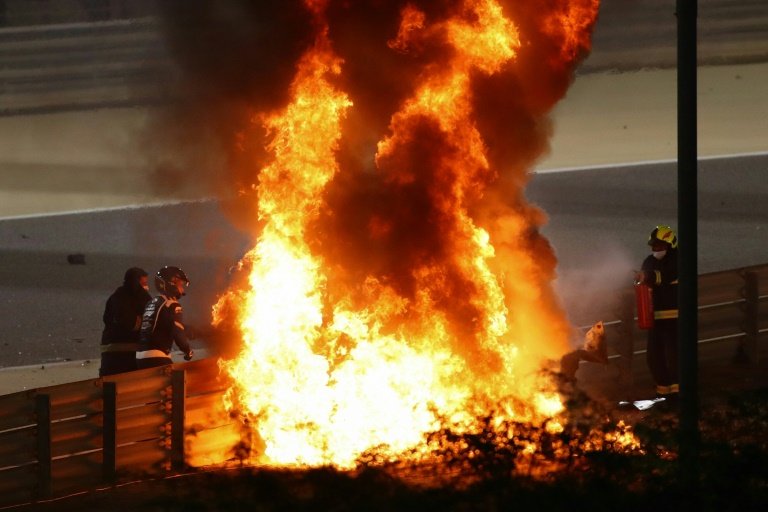 Romain Grosjean's fireball crash at the Bahrain Grand Prix has provided important lessons "that will advance our mission to improve safety in Formula One and in motor sport," International Federation (FIA) President Jean Todt said on Friday.

Todt was speaking as the FIA published its report on Grosjean's accident.

The Frenchman narrowly escaped death when his Haas car burst into flames after it crashed into a barrier at 220km/h on the first lap at the Sakhir circuit on November 29.

The car was destroyed in just 28 seconds.

The report found that, Grosjean, with his car embedded in the barrier, his cockpit buckled, debris from the engine blocking his escape, his fuel on fire and his left foot trapped, was still able to climb out in 27 seconds.

"The driver was able to free his foot by withdrawing it from his racing boot leaving the boot in the entrapped position in the car and then moved both the dislodged headrest and steering wheel to egress the car," said the report.

The FIA said that its investigation into what caused the fire in Grosjean's car, along with 18 other reports on "significant accidents" in 2020, have allowed it to identify a series of ways to enhance track safety.

These include improving the fire resistance of drivers' gloves after Grosjean suffered burns to both hands, the development of cockpit fire extinguisher systems, the provision of alternative fire extinguishers in emergency vehicles and training for local fire-fighters on the circuits.

The FIA said it will also examine improving safety barriers.

The report found that in the crash "the fuel tank inspection hatch on the left-hand side of the chassis was dislodged and the engine fuel supply connection was torn from the fuel tank 'safety bladder'; both providing primary paths for the escape of fuel."

"Fire was ignited during the final moments of the barrier impact, starting from the rear of the survival cell and progressing forwards towards the driver as the fire grew,"said the statement.

But, the FIA found, the driver safety equipment including helmet, the head and neck safety device (HANS), the safety harness, the Halo and the cockpit 'survival cell' had "performed according to their specifications in protecting the driver's survival space and managing the forces applied" as Grosjean hurtled into the barrier at a force 67 times his weight.

Todt said that work already done had helped save Grosjean.

"The enduring commitment of the FIA...on reducing risks associated with motor sport enabled Romain Grosjean to maintain consciousness and survive an accident of this magnitude. Safety is and will remain FIA's top priority," Todt said.