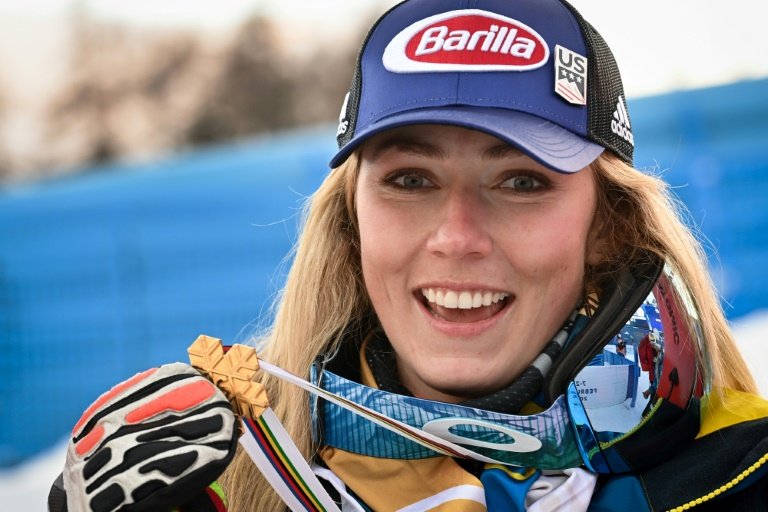 After a tormentous year, Mikaela Shiffrin has rebounded in the best possible fashion to become the most decorated American medallist in world championship history.

Shiffrin stepped away from skiing after the sudden death of her father Jeff last year, a season itself cut short by the Covid-19 pandemic.

After more than 300 days off the slopes, Shiffrin made her World Cup return and opened her account at the Cortina d'Ampezzo worlds with a super-G bronze after just four days of speed training.

An impressive gold in Monday's alpine combined saw her surpass Lindsey Vonn as the US skier with most world medals -- nine. It was also her sixth gold, meaning she overtook Ted Ligety as the American with most world podium-topping performances.

After two training days when the individual and team parallel events were held, Shiffrin can realistically target additions to her medal haul.

Thursday will see the 25-year-old compete in the giant slalom, an event in which she is reigning Olympic champion.

And on Saturday, she will bid for an unprecedented fifth consecutive title in the slalom.

"My biggest goal for the rest of the time is to keep that (carefree attitude) going even though my big events are coming," said Shiffrin.

"My priority events are coming up so I have plenty to focus on there because I think it’s going to be good competition."

Should Shiffrin win gold in either of the technical events, she would move ahead of Switzerland's Erika Hess in the list of world championship gold medals to join France's Marielle Goitschel and Sweden's Anja Paerson in equal-second.

Germany's Christl Cranz holds the women's record with 12, all dating from the 1930s when ski racing was an altogether different sport than it is today.

Shiffrin is quick to play down talk of records, however, insisting she didn't know how many world medals she had won but adding that the combined gold had come like a pressure release.

"When I don’t have the expectations and I just focus on the right things, then my skiing tends to be really good and then I have a better chance at getting a podium or winning or getting the medals," she said.

"And I started this world champs with that mentality."

The last two worlds have seen Shiffrin collect a bronze and silver in the giant slalom, the Are 2019 event won by Slovak Petra Vlhova, the current overall World Cup leader.

Vlhova won silver behind Shiffrin in the combined in Cortina, but failed to make the cut for the individual parallel giant slalom.

"It's going to be tough for me but I am here to fight," Vlhova had said after the combined, saying she was happy to have opened her account.

"Of course, if you have a medal then you are a little bit quiet and you can focus for the next races."

France's Tessa Worley, the 2013 and 2017 world giant slalom champion, picked up a bronze in the parallel GS.

It continues a fine return to form for the French racer who has undergone two knee surgeries over the last two years.

"It's a piste I like a lot," said Worley of the Olympia delle Tofane piste.

"The bottom of the course is quite easy, even if it isn't obvious to create and then keep up your speed."

Italian hopes will lie with Marta Bassino and Federica Brignone in the absence of their injured teammate Sofia Goggia, while Switzerland will back Lara Gut-Behrami and Michelle Gisin to reach the podium.