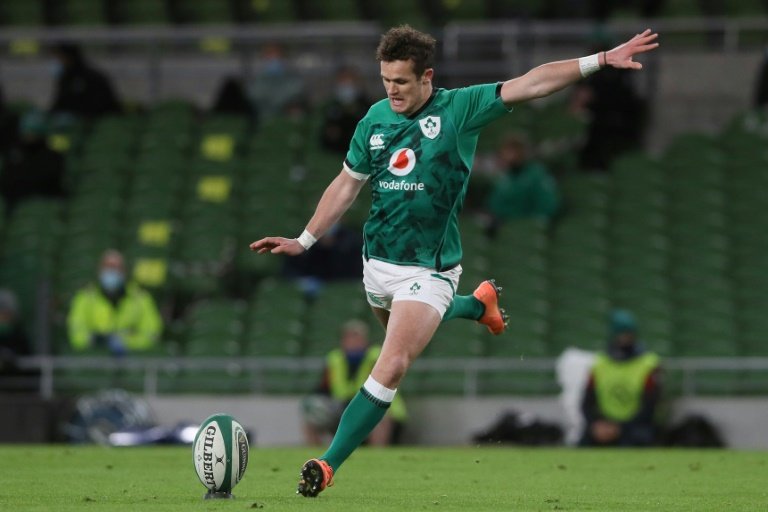 Billy Burns gets his chance to put himself in pole position to be the long term successor to Johnny Sexton as Ireland fly-half with his first start against Georgia on Sunday.

The 26-year-old England born playmaker has impressed in his two performances coming on as a replacement in the previous Autumn Nations Cup games, the win over Wales and defeat by England.

The Ulster stand-off -- who qualifies through an Irish grandfather -- will be partnered by veteran scrum-half Conor Murray as head coach Andy Farrell rang the changes in the starting lineup.

Burns and Murray replace Leinster duo Ross Byrne and Jamison Gibson-Park -- the former makes the bench as the latter misses out entirely.

"We are excited to see Billy get his first start and run the show for the first time," said Farrell at Thursday's press conference.

"He has been involved from the bench now is his chance to grab a hold of the team and the game."

Farrell's men looked sharper when that trio -- and Murray -- came on against England with Burns setting Stockdale up for their try.

Henderson will partner James Ryan in the second row, with the latter captaining the side for the second time in the absence of the injured Sexton.

Farrell says he hopes 24-year-old Ryan will have learned from that experience which was a tough one with England running the show in the line-out until Henderson came on.

"It is a great opportunity for him (Ryan) to reflect on that experience and go again captaining the side," said Farrell.

Another Ulster player Stuart McCloskey gets his first start of the tournament as he partners Chris Farrell in midfield for only his fourth cap.

McCloskey replaces Bundee Aki whilst the other two frontline centres Garry Ringrose and Robbie Henshaw are both injured.

"He is in fine form and should be an exciting partnership with Chris."

Should Ireland beat Georgia -- who have been beaten by England and Wales without registering a point -- they are likely to finish second and face the runner-up from the other pool.

That will probably be Scotland unless France suffer a surprise home defeat to Italy this weekend.

Farrell has already got the better of the Scots in the Six Nations but sobering defeats recently to les Bleus and England have raised concerns amongst pundits and fans.

The former England international, though, says it is all part of the process as he rebuilds following last year's Rugby World Cup and the departure of his predecessor Joe Schmidt.

"Of course you can call these growing pains that is a good way of putting it. Or you can call it priceless experience as well," Farrell said.

"I made it pretty clear this tournament is an opportunity to grow our playing pool.

"We are, due to population and other sports, a small playing pool and are one or two injuries away from a crisis. We are building for the future.

"Going away to two big playing nations England and France is about learning and feeling the pressure and making sure we bottle that for the future."