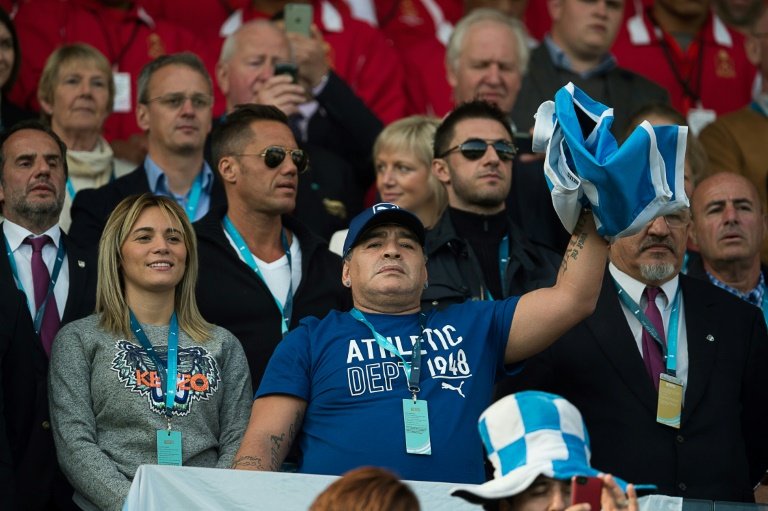 Diego Maradona epitomised what it meant to wear the Argentina jersey, the nation's rugby coach Mario Ledesma said Thursday, remembering him as "passionate about everything".

The football legend died Wednesday at the age of 60, plunging his South American homeland and football globally into mourning.

Maradona was also a big rugby fan and was often spotted watching the Pumas.

"He was passionate about everything. He used to go and watch hockey, rugby, football, everything, whenever there was an Argentina jersey he was there," said Ledesma as his team prepares to face New Zealand in Australia on Saturday.

"We try to remember him the best way possible, which was on the field representing these colours and he was an example of how you should play for this jersey.

"When he was the number one player in the world, he would cross whatever continent to get back to play for Argentina, being injured or not injured," he added.

Ledesma remembered Maradona sometimes visiting the team's changing rooms, including during the 2015 World Cup in England, celebrating with them during their run to the semi-finals.

"The reaction of the players, obviously the ones who felt it most are the staff because it was more our generation when Diego played on the field," said Ledesma.

"Most of the players here didn't watch him when he was playing but they saw videos. He was a big figure in our country and he epitomised a lot the way Argentinians are."

Whether Maradona managed to watch Argentina beat the mighty All Blacks a fortnight ago for the first time in 35 years, Ledesma is not sure.

But he said he hoped he was able to, with the victory bringing a ray of light to a nation beaten down by months of economic crisis and the coronavirus pandemic.

"I hope for him because the last couple of months have been really difficult for him. If we could have made him happy just a little bit, that would be great."

All Blacks coach Ian Foster also paid tribute, noting that it was "a sad day for Argentina as a nation".

"All we can do is commiserate with them. He was an iconic sporting person."