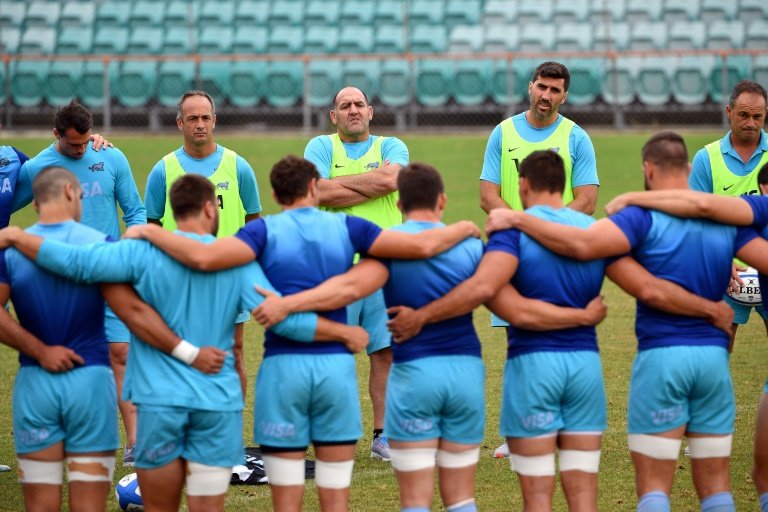 Argentina's rugby head coach Mario Ledesma (top, centre) talks to his players during training at Leichhardt Oval in Sydney, ahead of the weekend Test against the All Blacks / © AFP

Coach Ian Foster made three changes to his forward pack Thursday to face a new-look Argentina as the All Blacks desperately look to avoid the ignominy of a third defeat in a row.

The three-time world champions have been under intense scrutiny from fans and pundits after shock losses to Australia and the Pumas in consecutive weeks during the Tri Nations.

If they fail to win on Saturday at Newcastle, north of Sydney, they will become the first New Zealand team to lose three in a row since 1998.

Foster, who has faced calls for his axing after just five games in charge, shuffled his pack to deal with an Argentinian team boasting 10 changes from the side who started the 15-15 draw with the Wallabies last weekend.

All Blacks prop Nepo Laulala comes into the front row, with Tyrel Lomax benched, while lock Scott Barrett was preferred to Patrick Tuipulotu.

Loose forward Akira Ioane will start in the number six jersey, after his Test debut against Australia in Brisbane this month, in place of Shannon Frizell.

"We've had a great week building into what will be a vital Test for us," said Foster.

New Zealand's bye last week gave them an opportunity to work out what went wrong in their 25-15 humbling by the Pumas in Sydney a fortnight ago -- their first defeat to Argentina in 35 years.

That embarrassment followed the All Blacks crashing 24-22 to Australia.

Despite his team being unbeaten in this year's Tri Nations with a win and draw so far, Argentina coach Mario Ledesma opted to shake up his side after two bruising encounters in as many weeks.

The only players to retain their starting spots are playmaker and sharpshooter Nicolas Sanchez, who has scored all 40 of their points so far, captain Pablo Matera, lock Guido Petti, flanker Marcos Kremer and veteran hooker Julian Montoya.