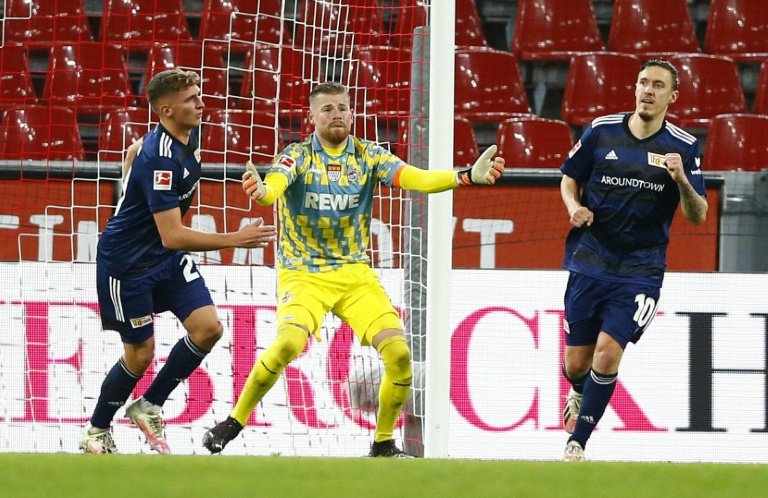 Union Berlin striker Max Kruse endured a bittersweet evening on Sunday as he scored the winner in a 2-1 win away to Cologne but missed the chance to break a 37-year-old Bundesliga record.

Having never previously missed a penalty in the league, the 32-year-old looked set to become the first player ever to score 17 out of 17 spot-kicks in the German top flight.

Kruse's hopes of making history were dashed when his second-half penalty was saved by Cologne keeper Timo Horn, but he bundled in the rebound to seal the three points for Union.

Liverpool loanee Taiwo Awoniyi gave the Berliners the lead midway through a scrappy first half, the Nigerian striker holding off two defenders in the box to prod home his first goal for Union since joining from Anfield last summer.

Cheered on by the eerie sound of crowd noise being played over loudspeaker by a handful of creative supporters outside the ground, the home side snatched an equaliser through Ellyes Skhiri shortly before half-time.

With 20 minutes to go, Marcus Ingvartsen was brought down in the Cologne box, giving team-mate Kruse the chance to make history from 12 yards.

Despite ruining his spotless record from the spot, Kruse kept a cool head to restore Union's lead on the rebound.

Cologne, who hit the post in stoppage time, are now without a win in 18 league games, in a barren run which stretches back to March. With just three points from eight games this season, Markus Gisdol's side sit second from bottom.

They were leapfrogged by fellow strugglers Mainz on Sunday, who picked up their first win of the season thanks to a Jean-Philippe Mateta hat-trick.

The young French striker scored three first-half goals as Mainz shook off their early-season blues to cruise to a 3-1 victory away to Freiburg.

The 23-year-old notched up his second hat-trick of the season to take his tally to 10 goals in all competitions.

"I'm very happy about my three goals but the three points are the most important thing. This was a team victory," said Mateta.

Mateta opened the scoring after just 61 seconds, breaking Freiburg's high line to pick up a Leandro Barreiro through ball and stroke it past former team-mate Florian Mueller in the Freiburg goal.

The Frenchman doubled the lead just after the half-hour mark, pouncing on the rebound after Mueller spilled a long-range effort from Robin Quaison.

He completed his hat-trick a few minutes later, beating the offside trap yet again to slot the ball inside the far post from close range.

Nils Petersen pulled a goal back for Freiburg on 64 minutes, tapping in from close range after Robin Zentner palmed away a low shot from Roland Sallai.

While Mainz breathe a sigh of relief, defeat heaps pressure on Freiburg, who have not won since the opening day and now sit just one place ahead of Mainz in 14th.