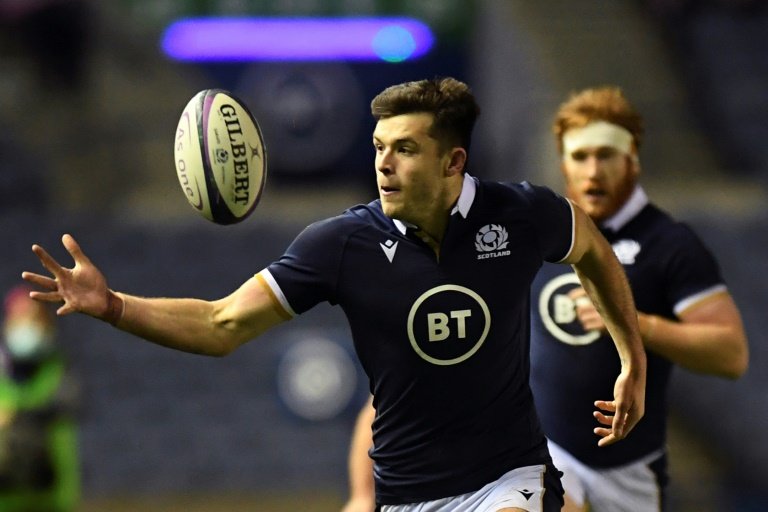 Blair Kinghorn has insisted there is nothing lucky about Scotland's winning streak as they head into this weekend's Autumn Nations Cup clash with France.

Gregor Townsend's men will kick off at Murrayfield on Sunday on a run of five successive victories -- over Italy, France, Georgia, Wales and Italy again -- in what is their joint-best sequence since rugby union became a professional sport.

A victory over Les Bleus would mean the Scots had won six in a row for the first time since 1990.

Italy, however, are perennial Six Nations strugglers, France had prop Mohamed Haouas sent off for punching Jamie Ritchie, Georgia are a second-tier nation and a first win on Welsh soil was achieved against a side on a run of six defeats following last week's 32-9 loss to Ireland.

"Winning five international games in a row is not a fluke," Kinghorn said Wednesday.

"We have been playing good rugby, regardless of what people think of the other teams. We play a good brand of rugby.

But while a resurgent France are now one of Europe's form teams, Kinghorn added: "We know the challenge that France can bring, but we are up for it.

"Yeah, France only had 14 men last time we played but quite often you see teams with 14 men come out on the winning side of the result because a team with 15 think they've got the game won and relax.

"That wasn't the case with us, so hopefully we can back that performance up and get another victory."

That defeat was France's lone reverse this year and Fabien Galthie's side should be raring to go on Sunday after being awarded a 28-0 walkover when last weekend's match against Fiji was cancelled because of a Covid-19 outbreak among the Pacific islanders' squad.

"I think the main feeling I had in the first game against France was that in the second half I felt really comfortable," said Kinghorn.

"I felt we could contain their threats are very well," the 23-year-old added. "They have some dangerous individuals, but we defended really well that day and it was good to get the result.

"I think we are all buying into the same goal. Line breaks and missed tackles will always happen in games, that's the nature of the game, but you see our work rate and our relentless effort to work hard for each other. That's the main point -- everyone is working hard together for one goal."