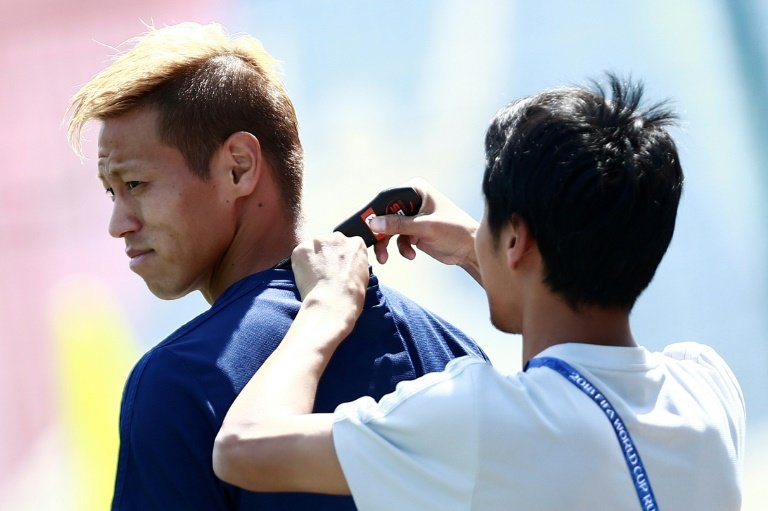 Japan midfielder Keisuke Honda has a GPS tracker device fitted during training at the 2018 World Cup in Russia. Connected devices are increasingly shaping the workouts of professional athletes / © AFP/File

When the Greek runner Spiros Louis lit the flame under the Olympic ideal by winning the first marathon in the 1896 Olympics, he did it fuelled on a traditional Mediterranean diet.

He was a water-carrier by trade but reports of that historic first marathon -- which did indeed start in the town of Marathon -- tell of a pitstop he made when he was on the outskirts of Athens.

He stopped to say hello to his girlfriend and drink a glass of red wine.

Things have changed a little bit since then and it is hard to imagine what Louis, or his girlfriend, would have to say about a modern dietary regime for athletes that has moved from red wine to Bluetooth.

And it is not just diet. Every aspect of a top athlete's performance is now monitored by some form of artificial intelligence.

Heart rate, blood sugar, sleep... you name it, somebody, or something, is checking it.

Under the jersey, on the arm, around the wrist, the devices are as discreet as possible but are precious tools in honing performance.

"Today, the number of technological advances, which make it possible to follow the physiological state of an athlete, is exploding," Gael Guilhem, director of the sport, expertise and performance laboratory of the French Sports Institute (Insep), told AFP.

The object is to collect personal data so as to leave nothing to chance and perfect each parametre of preparation.

"At Insep, we have a unit that meets every two weeks to study all the requests from companies. We have about 10 a week on average," says Guilhem.

From GPS trackers to follow the movements of rugby players to 'intelligent' shin guards for footballers that count calories expended and the number of touches of the ball, plus sensors that analyse the blood, sweat or saliva of runners, the applications seem limitless in the quest to optimise performance.

One of the latest innovations is the "Supersapiens" app that uses a sensor to measure blood glucose. Already being used by leading cycling teams Jumbo-Visma, Ineos and Canyon-Sram, it promises to "revolutionise" energy management.

Inspired by devices used by diabetics, it comes in the form of a patch stuck on the arm and measures the level of glucose in the blood in real time to tell the athlete when to eat.

Its founder Phil Southerland maintains that it helps maximise the management of effort and recovery.

"There's an easy insertion process, it stays on for up to 14 days and sends a signal via Bluetooth to our app," he says.

"Within the app, you see not just where your glucose is but more importantly the direction it is going in.

"So if you're an athlete and you see it is going up, you know 'I don't need to eat right now' but on the contrary, if you see it going down..."

A diabetic himself and boss of the Team Novo Nordisk cycling team, Southerland quickly understood the value of such a device for professional athletes.

"What we are bringing is like a fuel gauge for athletes so that no matter what your physical capabilities are as an individual, we want to help you make sure you have enough fuel in the tank to be the best version of yourself.

"It is incredibly important for athletes. We're not going to help you beat the world record but we're going to be that last tool to allow you to fuel properly in your training and during competitions."

Sport's interest in science is hardly new -- the ancient Greek physician Galen was writing essays about nutrition, aerobic fitness and strengthening muscles in the second century.

Science kicked up dust, legitimate and illegitimate, during the Cold War but the last decade has seen major advances, largely through the emergence of GPS trackers.

Integrated into a tight-fitting halter worn under the player's jersey during training or matches, they are used by numerous teams.

When they first appeared, they transformed data analysis by allowing performance to be monitored objectively, without disrupting the athlete's activity and in a competitive situation, rather than in the laboratory.

"A lot of clubs use the same tool as us and send us their data. We integrate it into our system and we put everything together to plan better how the player will train."

This system of data management and collation are hugely important for athletes and their coaches but, according to Insep's Gael Guilhem, human contact still remains "fundamental".

"While technology can shed light, there is no doubt that it cannot answer all the questions high performance athletes ask themselves." he says.

Perhaps there is still room for the roadside glass of wine.