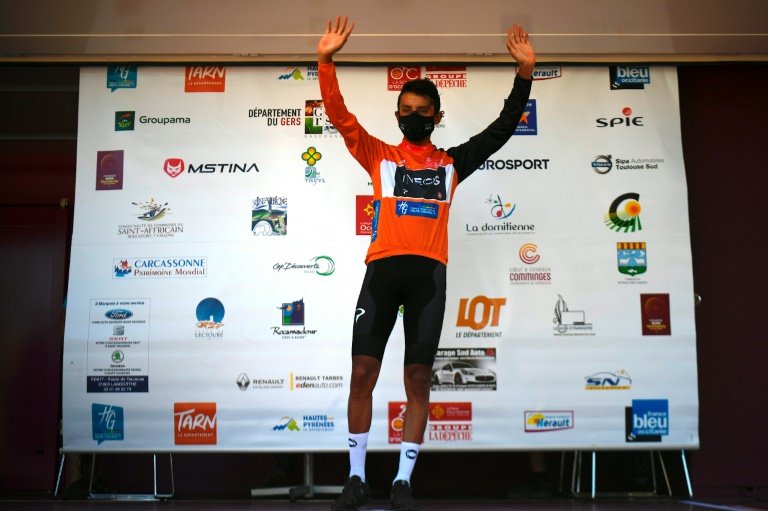 Tour de France champion Egan Bernal secured overall victory in the Route d'Occitanie on Tuesday, underlining his strength ahead of cycling's most prestigious race which starts later this month.

It was an emotional day for Bernal's team as late Ineos director Nico Portal's wife and family joined a minute's applause ahead of the stage. Portal died in March at the age of 40.

Bernal, and Chris Froome, who Portal coached to Tour wins, lined up alongside team principal Dave Brailsford in a touching homage.

"This morning it was nice to share some time with Nico Portal's family, they are part of our family," said the lithe-looking Bernal.

The Colombian secured his win by finishing fourth Tuesday at the end of a 195km ride through the Causses de Quercy national park, a popular hiking destination known for its dramatic cliffside paths.

"It was a stage I had earmarked and I'm really happy for myself and the team," smiled 24-year-old AG2R man Cosnefroy.

The pair pulled off an Ineos 1-2 on stage three Monday, gaining the time on the final mountain ascent that eventually secured the overall win.

The 23-year-old Bernal is favourite to win this season's Tour, which was postponed to August 29 due to the coronavirus pandemic.

The British rider ended nearly 10 minutes behind teammate Bernal, but did enough to suggest he could well be on the Tour roster.

"I feel this racing will really help bring my level up as we head towards the Tour de France," Froome said.

Bernal will ride next in the Criterium du Dauphine, which starts on August 12 and is the final dress rehearsal for the Tour.

Frome won four tours with Portal, and spoke of the former rider and sports director fondly.

"It was quite an emotional day remembering Nico, riding on old roads where I would join him quite often on recons and spending time with him and brought back a lot of memories."

Classification from fourth and final stage: