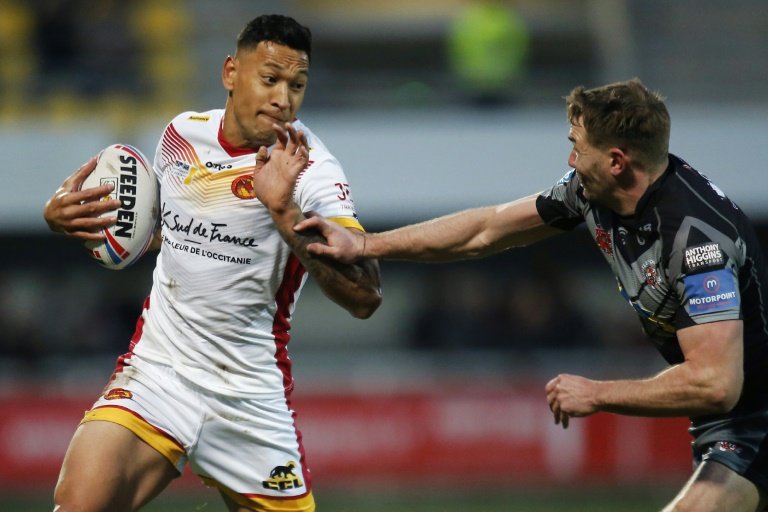 Rugby League enters a new era on Sunday with scrums abandoned amidst the coronavirus, plans made to speed up play and cash-conscious French club Catalans Dragons reluctantly ditching budget travel.

Scrums, rarely the set-piece physical test of strength which so dominates rugby union, will be scrapped from the 13-a-side code.

It's chiefly on health grounds after research showed that the "micro-climate" of at least six players in such close proximity numerous times a game increased potential virus transmission.

Scrums in rugby league have been mostly uncontested for years, but officials still plan to reinstate them when the health situation improves.

"They calculated that a scrum was equivalent to 25 tackles. In that sense, it's a smart move," said Remi Casty, captain of the Catalans Dragons.

Sunday will be the first of five away matches for Perpignan-based Dragons, now the only non-English side left in Super League following the withdrawal of the Toronto Wolfpack.

"We are happy to resume even if it has not been easy," added Casty, whose team includes controversial Australian back Israel Folau.

Sunday's game will be behind closed doors and on neutral territory in Leeds.

The current health crisis also means the Dragons have to dig deeper into their pockets to get to England.

They usually fly from Barcelona via low-cost airlines, but now must switch from Ryanair to a private jet, making the round trip during the day.

To play, they need to remain bio-secure.

This will cost 30-50,000 euros at least, or "between five and 10 times more expensive than a normal trip", according to media manager Yannick Rey.

But the Perpignan-based team are not complaining.

"Things have really evolved because we no longer have to quarantine when we go to England", said Rey.

The Dragons have also been buoyed by knowing they can play at their Gilbert-Brutus stadium from early September with some fans, while their English rivals play until October behind closed doors and on neutral ground.

Dragons had a pre-crisis budget of 12 million euros with private sponsorship accounting for around five million. They have 5,000 season ticket holders.

"If we played behind closed doors, it would be synonymous with the end of the season, like Toronto," said Rey.

The Rugby Football League did receive £16 million of aid from the British government during the five-month coronavirus suspension, but only the English clubs benefited.

The Dragons had to be satisfied with the 'partial unemployment' system offered by the French government.

"Alone, that's the right word. We feel very isolated," said manager Alex Chan, a New Zealander who once played in the NRL before decamping to France.

"Even on the administrative work concerning the protocols, we had to do more because we are a French club.

"They told us it was our job to translate everything."

Having started the season well before the crisis with three wins and one defeat, and reinforced by the arrival of the controversial Folau, the Dragons must now negotiate the restart under extraordinary conditions and a tight schedule.

They will play 15 regular tournament matches in three and a half months which raises concerns for the health of the players.

That's all against a background of fears over whether or not the season will actually get to its November conclusion if England or France suffer a second wave of virus.

The English "have taken extremely thorough measures" to fight against the spread of COVID-19, added Rey.

"If a player contracts the virus, it's the end of the championship again."