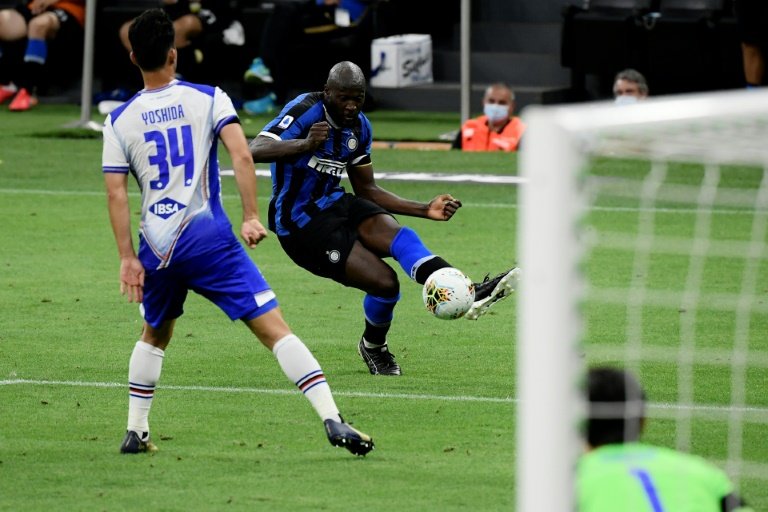 Serie A made its comeback this weekend following a break brought about by a coronavirus crisis that hit Italy especially hard, with Atalanta back thrilling fans and Romelu Lukaku continuing his brilliant debut season for Inter Milan.

Here, AFP Sport looks at five of the key moments from the first round of matches after three months away:

Lukaku continues where he left off

The Belgian's impressive debut season with Inter continued on Sunday against relegation strugglers Sampdoria, with his first-half strike taking his league tally to 18 goals this term.

Lukaku has scored 24 times in all competitions for Inter since joining from Manchester United and looks to have found a new home in Milan alongside a number of former Premier League stars, including ex-Chelsea coach Antonio Conte.

Inter sit six points adrift of league leaders Juve with 12 matches remaining and will need Lukaku to maintain his form if they are to claim a first Serie A title since winning the treble under Jose Mourinho in 2010.

"It was very important to win today, as from now to the end of the season it's 12 finals, they are all life or death," Lukaku told Sky Sport Italia.

Inter were not at their best against Sampdoria, but coach Conte would have been content with a 2-1 win that keeps their title hopes alive and by the performance of Christian Eriksen.

The January signing from Tottenham Hotspur, who scored directly from a corner in the Italian Cup semi-final loss to Napoli, was handed a more central role behind forwards Lukaku and Lautaro Martinez.

The Dane, who made 62 assists during his seven years in the Premier League, laid on Lukaku's opening goal in another influential display.

Atalanta continued their remarkable campaign exactly where they left off with Sunday's 4-1 win over Sassuolo, bringing some joy to a city that was at one point the global COVID-19 epicentre.

"This is not just any restart. It's for a region that has suffered three months of living in warfare. Nobody can forget the sounds of the ambulances streaking down the street," said director Umberto Marino pre-match.

Then the goals rained down, three in the first 37 minutes with two more chalked off and goalscorer Duvan Zapata also hitting the bar. With 74 goals in 26 league matches, Atalanta are well on course to net over 100 times this season.

They will be one of the eight clubs to take part in the last eight Champions League tournament set to be held in Lisbon in August, and Sunday's spectacular win showed why they are favourites to rejoin Europe's elite next season. 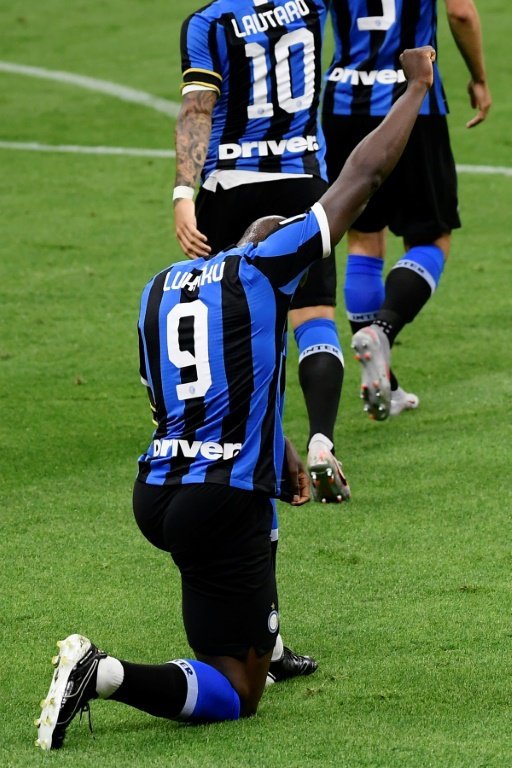 Romelu Lukaku took a knee after scoring on Sunday / © AFP

While matches in the Bundesliga and Premier League have begun with teams taking a knee in honour of the global Black Lives Matter, the approach has been more ad hoc in Italy.

Neither match on Saturday began with players taking the knee as a minute's silence is held for those killed by COVID-19, although Cameroonian Nicolas NKoulou did after giving Torino the lead in their 1-1 draw over Parma.

However Torino drew heavy criticism on social media for publishing a tweet with the #BlackLivesMatter hashtag with an image of NKoulou kneeling before Italy striker Andrea Belotti, who is white.

Lukaku also took a knee after his goal on Sunday.

Just five seconds had passed of Serie A's comeback fixture when the referee at Turin's Stadio Olimpico Massimiliano Irrati had to call the players back to retake kick off -- thanks to a deflated ball.

It was an inauspicious restart to the top division after what had been a successful return of football over the previous week, with Napoli winning the Italian Cup after entertaining last four and final fixtures in front of large terrestrial TV audiences.