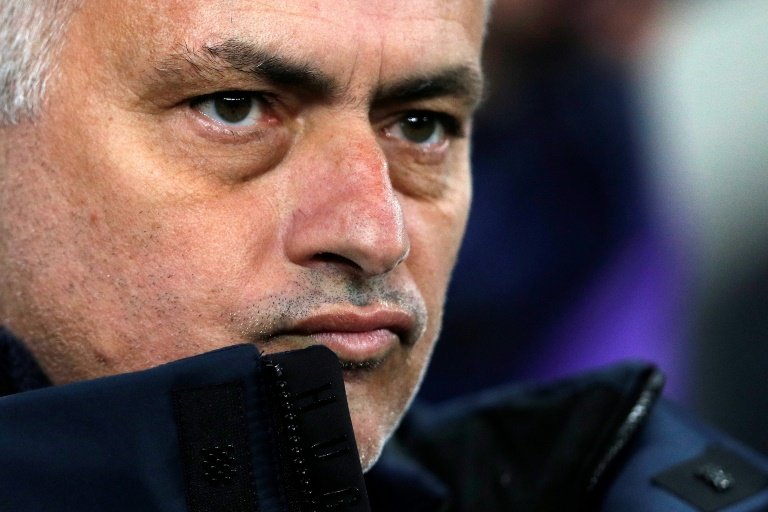 'Like going to go a gunfight without bullets' says Mourinho / © AFP

Jose Mourinho had his excuses ready made for a 1-0 home defeat to RB Leipzig that leaves Tottenham needing to recreate their escape acts of last season to progress to the Champions League quarter-finals.

Already without Harry Kane due to a long-term hamstring injury, the news that Son Heung-min could miss the rest of the season with a fractured right arm on Tuesday was a body blow to Spurs' chances of progressing.

"It's like going to a gun fight without bullets, so we did what we could do," concluded Mourinho, who bristled at criticism of his set up.

As the Portuguese complained about his lack of resources, it was easy to forget that Leipzig were the novices at this stage of the competition.

Tottenham progressed further in the Champions League for the past three years under Mauricio Pochettino, culminating in a rollercoaster run to last season's final.

A similar run this season is hard to imagine with even Mourinho questioning how his side muddles through to the end of the season without their two top goalscorers.

"What I am worried with is not with the 1-0 because the 1-0 is an open result. The 1-0 you can perfectly go there and win the tie," added Mourinho.

"What worries me is that these are our players for I don't know how many matches. We have to play in two days again. We could see Lucas (Moura) absolutely dead, (Steven) Bergwijn absolutely dead, (Giovani) Lo Celso dead."

Given his paucity of options up front, Mourinho needs to get the best from those he does have.

However, Dele Alli stormed off when he was replaced 20 minutes from time and slammed his boots down in the dugout.

"I think he was angry with his performance, not with me," insisted Mourinho. "I think he understood why I took him off and the team improved."

Mourinho needs to get Alli back onside and back to the form of his early weeks in charge at Spurs if they are to make it back into the competition next season.

A run of three straight Premier League wins despite far from perfect performances has lifted Mourinho's men to fifth in the table.

That could be enough for Champions League football next season due to Manchester City's two-season ban from European football by UEFA.

However, Tottenham have their fate to finish in the top four and guarantee another season of Champions League riches. They trail Mourinho's old employers Chelsea by just a point ahead of their trip to Stamford Bridge on Saturday.

"The Chelsea players were watching this game on TV, with nice sparkling water with lemons and biscuits, enjoying the game and we play Saturday at 12 o'clock," added Mourinho, again preparing his excuses.

Yet, patience is already wearing thin with Mourinho's tactics after another home game in which Spurs were happy to be dominated in possession and hoped to take their chance on the counter-attack.

Manchester City and Southampton were wasteful before falling to defeat in north London in recent weeks, but the hosts' luck ran out against a Leipzig side that showed why they are threatening Bayern Munich's grip on the Bundesliga.

"They look like a team just hoping they play well and get a break."

Mourinho is certainly hoping his injury list gives him a free pass even if it goes wrong in three competitions between now and the end of the season.