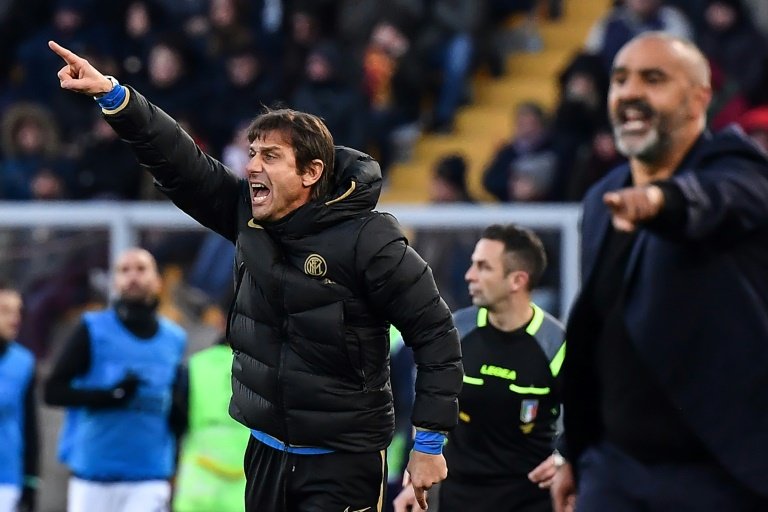 Inter Milan's Serie A title push hit another stumbling block on Sunday after a 1-1 draw at lowly Lecce as Ante Rebic fired city rivals AC Milan to a last gasp 3-2 win over Udinese.

Antonio Conte's Inter looked set to take maximum points from their coach's hometown team, where he started his footballing career in the 1980s, when Alessandro Bastoni headed the away side in front with 18 minutes remaining.

But Marco Mancosu grabbed a precious point for the southerners five minutes after going behind.

"For me there's always great emotion," said Conte of his return to Lecce.

"Coming back to the Stadio Via del Mare means going back 30-35 years. I spent my childhood as a ball boy here. There will always be this attachment, but I am a professional and I try to do this job better."

Inter have won only two of their last six league games, and although they are still one point behind leaders Juventus the reigning champions can stretch that to four points when they host Parma later on Sunday.

Conte's side are now also under threat from Lazio, who are just two points behind with a game in hand after hammering Sampdoria 5-1 on Saturday.

Lecce -- just one point above the relegation zone -- were coming off a four-match losing streak, but had held Juventus by the same scoreline back in October.

"Congratulations to them, even if conceding this goal leaves a bitter taste in the mouth," added Conte.

"The final result stems from the fact that we're a team that needs to go at 200 km/h, we cannot afford to be off the pace.

"We went at full pelt throughout the first half of the season and even beyond that."

Earlier Ante Rebic hit a brace, including the stoppage time winner, against Udinese that snatched a dramatic win that gave troubled AC Milan back-to-back league victories and moved them up to eigth, two points from the Europa League spots.

Star striker Zlatan Ibrahimovic got his first start at the San Siro after scoring last weekend at Cagliari. 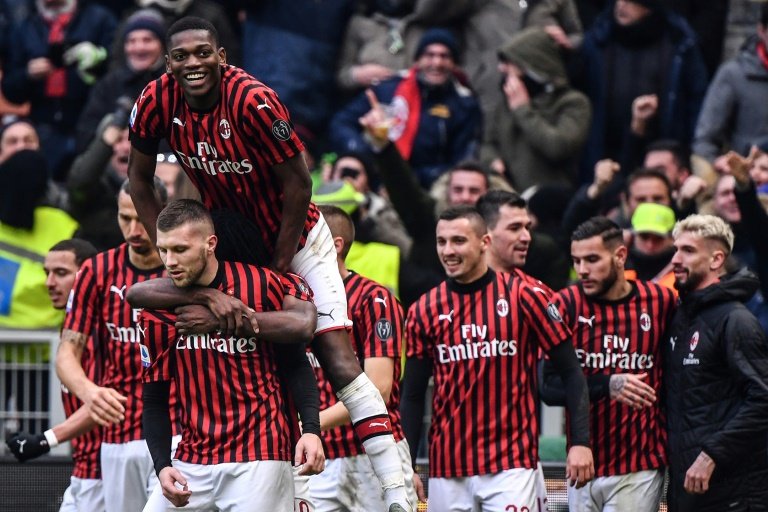 The 38-year-old Swede did not get to celebrate in front of the home crowd but he has provided a confidence-boost for the seven-time European champions, who have taken seven points in three matches since his return.

"The arrival of Ibrahimovic has given us even more depth and conviction, which has helped us," said coach Stefano Pioli.

Former Liverpool and Chelsea attacker Fabio Borini, who left Milan on Tuesday, scored his first goal on his debut for new club Hellas Verona in a 1-1 draw at Bologna that leaves them a further two points.

In the race for the Champions League Roma bounced back from back-to-back league defeats with a 3-1 win over struggling Genoa that put them back in the top four, three points in front of fifth-placed Atalanta ahead of their match with SPAL on Monday.

Cengiz Under opened the scoring after just five minutes and the match looked as good as won a minute before the break when a cross from Leonardo Spinazzola -- whose move to Inter broke down midweek -- bounced in off Genoa's David Biraschi.

Former Lazio striker Goran Pandev quickly pulled a goal back but Edin Dzeko had the last word with 16 minutes to go, pouncing on a error from goalkeeper Mattia Perin to send Genoa below Brescia into penultimate position.

In Brescia, Mario Balotelli came on late and was sent off just seven minutes later in a 2-2 draw against Cagliari.

The Italy forward entered the field in the 74th minute, but received a yellow card for a foul on Fabio Pisacane before picking up a second when he turned to argue with the referee.

Both sides' goals came from braces with Joao Pedro getting two for the visitors and Ernesto Torregrossa on target twice for third-from-bottom Brescia.

The sixth-placed Sardinians ended a four-match losing streak, but have not won since December 8.