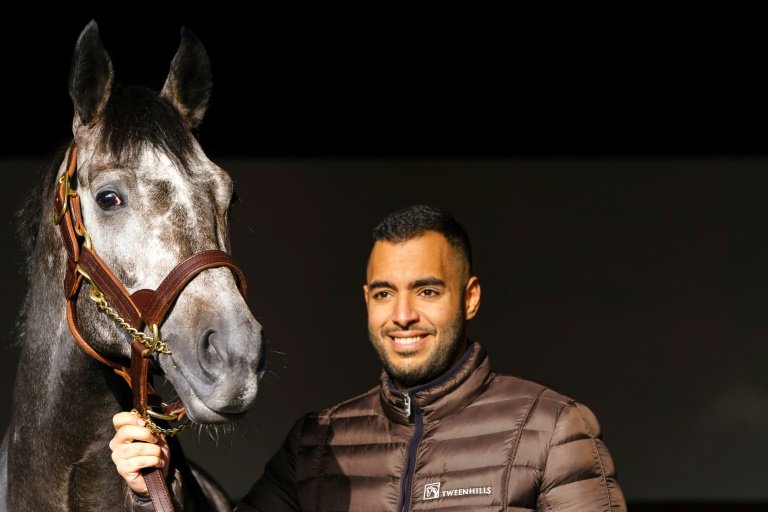 Sheikh Fahad Al Thani pictured with Roaring Lion in the stables at Tweenhills, near Gloucester in central England on November 15, 2018. / © JSC Communications/AFP

Sheikh Fahad Al-Thani, the driving force behind British Champions Day at Ascot, says he will never forget Queen Elizabeth II telling him "you are allowed to scream" as his Roaring Lion shaped to win the race named after her last year.

The 30-year-old Qatari, who was instrumental in the family's Qatar Investment and Project Development Holding Company (QIPCO) backing Champions Day in 2011 with prize money now of over £4million ($5million), duly obeyed as Roaring Lion prevailed by a neck under an inspired ride from Oisin Murphy.

"She (Queen Elizabeth) invited us (him and his brothers) up to watch the race with her as she knew we had a runner," he told AFP in a rare interview at the yearling sales at Newmarket.

"I was sitting next to her and I was trying to suppress my excitement and she was looking at me.

"At the two furlong pole (400 metres to go) she said to me 'you are allowed to scream and shout for your horse, you have to start now,' and once she said that I roared.

"It was quite emotional really."

Sheikh Fahad's memorable day might never have happened had his appeal in January 2009 to English breeder David Redvers to meet him in London been declined.

The problem was both a logistical one -- Redvers had just landed in New Zealand on a Friday and the invitation was for Monday in London before the Sheikh flew to the United States for the Super Bowl -- as well as one initially of suspicion on Redvers part.

"At that time there were several 'fake sheikhs' around and one in particular working for the News of The World," Redvers tld AFP.

"I asked a friend of mine who was working for a security company to come up with the information and he sent me a three-word text 'get on plane'."

Confessing he looked "a bit shabby" after 42 hours of travelling, Redvers made it by five minutes and their relationship -- he is Qatar Racing's racing and bloodstock advisor -- and Sheikh Fahad's decision to enter racing was born.

"The idea was dipping my toe into the water and if I really love it I keep going; if I don't just pack up," said Sheikh Fahad, a first cousin to the Emir of Qatar.

"I was quite happy to hear someone had an idea as I was watching racing and looking at pedigrees but I was not actively going to sales.

"I said I am going to be a bit of a passenger. You (Redvers) choose the horses and the trainers and he had a nice cross section."

For Sheikh Fahad, English racing was an eye-opener.

"Back home we had just the one racecourse where my mother used to win everything with her Arabian racehorses and here there were plenty of racecourses and something called jump racing!" he said.

Success came early for him as French horse Dunaden, bought for 125,000 euros, exceeded all expectations and won the 2011 Melbourne Cup and by the end of his career had accrued over £5million in prizemoney.

"We have tried again and failed, you do not appreciate at the time how hard and tough it is to win a race like that."

Sheikh Fahad, the middle child of seven, wants to win a lot of Group One races but there is one above all he desires the most.

"We want to win the (Epsom) Derby (Roaring Lion was third last year) and once you win that then you go to the Arc de Triomphe," he said.

On Saturday, the Queen will be spared a repeat of the ringing in her ears as Qatar Racing have no runners in the feature races.

However, Sheikh Fahad will be looking on proudly as 24-year-old Murphy receives the champion jockey trophy.

"They are part of the highs and the lows of racing," said Sheikh Fahad.

"However, we are very proud of Oisin, we nourished him from an early age.

"His success is our success and vice versa. He is Roaring Oisin."