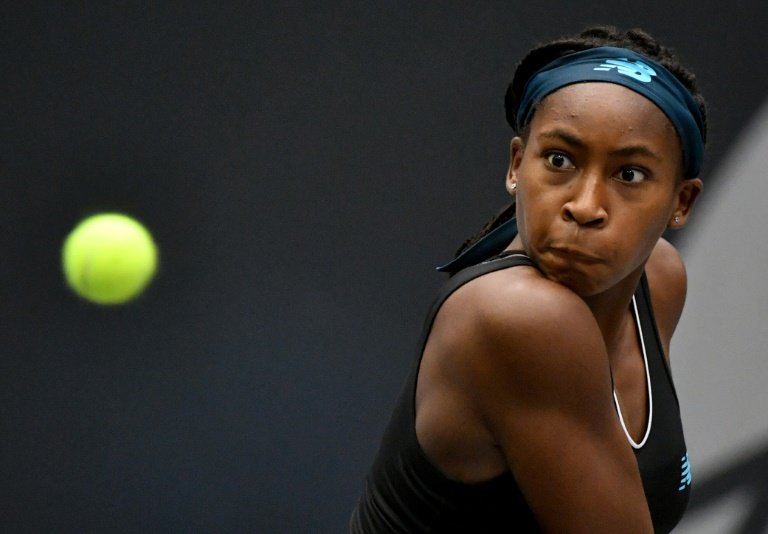 Coco Gauff's strategy sessions for the first WTA semi-final of her young career were put on hold for a few hours on Friday due to high-school homework.

The 15-year-old from Delray Beach, Florida, who has attended school online since third grade is starting to write records as well as essays after upsetting Linz tournament top seed Kiki Bertens 7-6 (7/1), 6-4.

Gauff became the youngest woman to reach a WTA semi-final since Nicole Vaidisova won the Tashkent title in 2004, and will take on Andrea Petkovic on Saturday for a spot in the final.

The 75th-ranked Petkovic booked her first semi in a year, defeating Viktoria Kuzmova of Slovakia 6-4, 6-1.

Gauff was getting down to studying after her late-afternoon win, with lessons beckoning in her hotel room.

"I just got off the court, so I've not thought about the semi-final," she said.

"I'm thinking of the homework I have to do tonight. I don't know what it is yet.

"I'm studying the typical stuff: math, English, history... I don't know what I have to do - but I know it's something."

Gauff said that while she is not bothered by juggling her tennis and school commitments, "sometimes I'm motivated and then I have moments when I don't want to do it (homework) at all."

The teenager earned her place in the field as a lucky loser from qualifying as Greek Maria Sakkari withdrew injured to start the week.

The Floridian, still under WTA age restrictions, is playing her fifth Tour-level main draw of 2019 after reaching the Wimbledon fourth round and making the third round at the US Open.

The Linz week has been a breakthrough for the world number 110 who will crack the top 100 on Monday, when she travels to Luxembourg for the last event of her season.

She is already assured of a spot in the Australian Open field in January with her rise in the rankings.

Gauff maintained control throughout over the eighth-ranked Bertens to earn her first victory over a top 10 player.

"There have been a lot of firsts this week," Gauff said. "I'm really happy and proud of how I'm playing.

"It's crazy today, beating a top 10. I'm super proud for what I've done. I couldn't ask for anything better at this event.

"I didn't have any nerves until the match points came along. Kiki was playing well and there was just a difference of one or two points.

"I'm glad I was able to come out on top. I've really gotten a lot of support from the crowd," she told a sellout audience in this upper Austrian regional capital.

Gauff was never threatened by her more experienced opponent, who owns titles this season at St Petersburg and Madrid and reached the Beijing semi-finals last week before returning to Europe.

Gauff stepped up to win the opener in a tie-break and broke for 2-1 in the second.