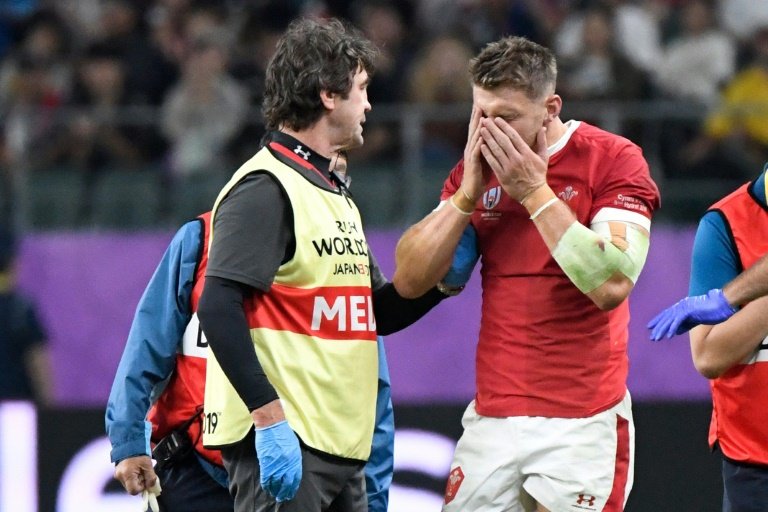 Fly-half Dan Biggar will miss Wales's final Rugby World Cup pool game after a sickening head clash in the 29-17 win over Fiji, coach Warren Gatland said on Wednesday, as they sweat on two more injuries in an eerie reminder of their ill-fated 2015 campaign.

A "battered" Wales came from behind to beat the Fijians but it came at a high physical cost, with Biggar ruled out of Sunday's Pool D meeting with Uruguay after he was felled in an aerial collision with team-mate Liam Williams.

The win confirmed the Six Nations champions' berth in the quarter-finals, which is as far as they went at the last World Cup when an injury-stricken side was knocked out 23-19 by South Africa.

"The guys are sore and battered," Gatland said after the bruising encounter, in which Wales twice fell behind an enterprising Fiji before Adams' third try in the 60th minute broke the match open.

Playmaker Biggar was concussed in Wales's previous game against Australia, but recovered during the 10-day break before Fiji and was cleared to play again.

But his latest hit to the head, which left him prone on the ground until medical staff could get to him, put his future in the tournament in doubt.

"He didn't do an HIA (head injury assessment), he was just removed from the field which means he is not in consideration for Sunday and will have to go through protocols and someone will have to take a look at him as well," Gatland said.

It also created a problem for Wales, who have Rhys Patchell as their only available fly-half for their final pool match against Georgia.

Gatland said Hadleigh Parkes, Hallam Amos or one of the scrum-halves could be switched to the pivot role.

With an eye on a possible quarter-final against France, Gatland said injuries aside he was pleased with Wales' performance as they rallied against a determined Fiji.

"For us it was disappointing to concede a penalty right at the start of the game and they scored off that," he said.

"Then from being 10-0 down to finish with a bonus-point win it showed some great character. We got ourselves back into it and finished really strongly.

"I'm definitely proud of our tactic against Fiji which was to work their forwards and to make them tackle and keep the ball on the park as much as we possibly could... and our fitness showed how hard we worked in the camps leading up to this competition."