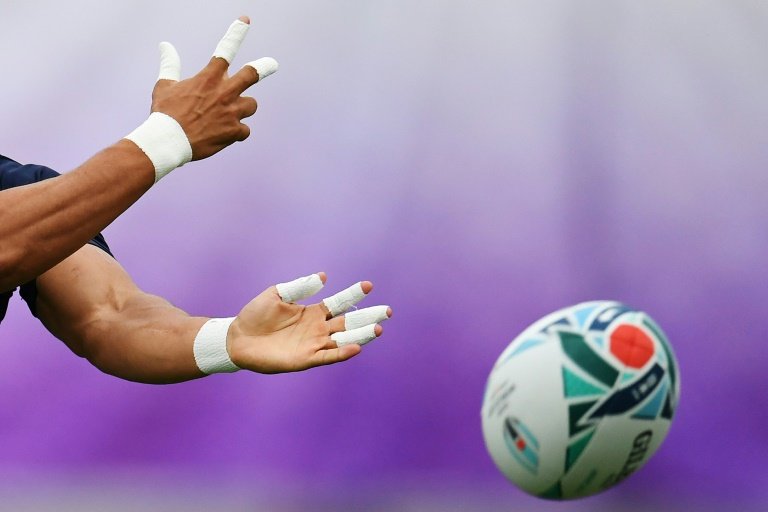 Teams are preparing to handle wet, slippery balls at the World Cup in Japan / © AFP

Shampoo and baby oil have become essentials in the training kit in the build-up to the Rugby World Cup as Japan's unpredictable weather threatens to have a significant influence on the tournament.

The prospect of snap changes from dry to wet and back again, and in intense humidity, have coaches working on plans to cover every scenario.

"The big thing will be the ball. That'll be the constant thing. The humidity will be high and the ball will be wet so skills will be really important," says All Blacks coach Steve Hansen.

Hansen, on a mission for New Zealand's third consecutive World Cup win, has been happy just to soak the ball in water during training sessions to mimic wet conditions.

But other teams have taken a more out-of-the-box approach.

Warren Gatland has admitted to using baby oil to make the balls slippery during Wales training sessions, while Scotland have turned to hair care, applying shampoo and conditioner to replicate a sweaty ball.

"The sweat is more of an issue. The wet is obviously not ideal, but the sweat is difficult to deal with," assistant coach Mike Blair said.

England coach Eddie Jones, who has forecast an England-New Zealand final, has made Japan's notorious autumn weather a central element in his planning over the past four years.

Having previously coached in Japan, the Australian-born England mentor has marked physical and mental resilience as key elements he wanted from players in his World Cup squad.

England’s hooker Jamie George explained: "We have buckets (of water) on the side of the pitch and we put the ball in that before we throw it."

But there have been no novel training tricks for Ireland, even though there is the prospect of torrential rain when they play their first game against Scotland on Sunday.

Loose forward Rhys Ruddock says the world's number one-ranked side are quite at home in the wet.

"We've had some big performances in the past in shocking conditions so it's not dampening excitement for the match," he said.

However, the issue for Ireland was adapting to what could be varying weather conditions during the 80 minutes of playing time, and which could prove crucial.

"I would think we're going to have to prepare for all outcomes, in terms of the weather," Ruddock said.

"The guys who are making those decisions on the day will have options depending on how the game's going, what the score is, the time on the clock and the weather definitely comes into it."

The forecast for the opening weekend of the tournament is for temperatures around 22 degrees Celsius (72 Fahrenheit) with fine weather interspersed with heavy rain.