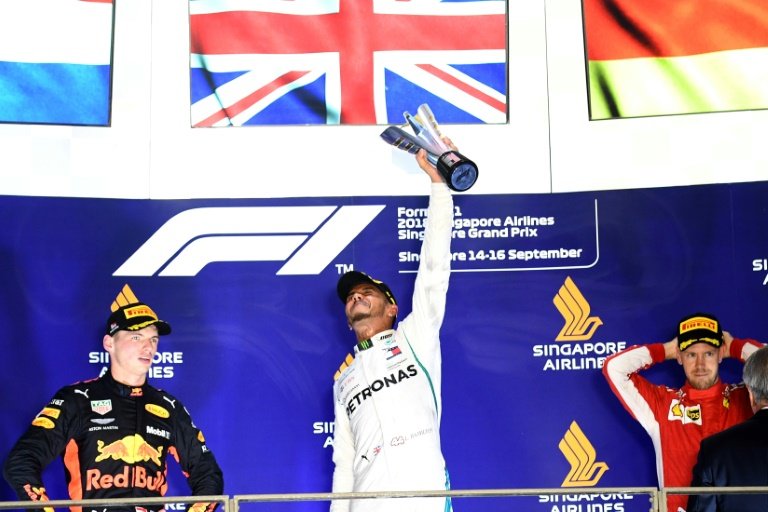 Lewis Hamilton will be hoping his march towards a sixth Formula One world title around the streets of hazy Singapore this week is not affected by smoke from wildfires raging in neighbouring Indonesia.

The National Environment Agency is forecasting pollution at the "low end of the unhealthy range" for Sunday's showpiece night race after dense smog last weekend.

Formula One bosses are reported to have a contingency plan in place should the "highly changeable" air quality deteriorate, though the race weekend is still scheduled to go ahead as planned.

Hamilton, who has a 63-point lead in the title race over teammate Valterri Bottas after winning eight grands prix this season, and Mercedes have prospered in the past at the Marina Bay Circuit.

But they could do little to prevent Ferrari's Charles Leclerc from storming to consecutive victories on power-friendly layouts in Belgium and Italy in the two races since the summer break.

Hamilton has taken four of Mercedes' five victories at the demanding 23-turn city-centre street circuit and is looking for a third consecutive triumph in race that even without the threat of smog is traditionally draining because of heat and high humidity.

But Hamilton remains wary of Leclerc, who has outshone his error-prone Ferrari teammate Sebastian Vettel since joining the Italian team at the start of the season.

"I am not looking forward to the next race thinking it will swing our way," Hamilton said of the 21-year-old from Monaco. "I hope that it is competitive between us -- I want this battle to continue."

Mercedes team principal Toto Wolff also expects Ferrari to be in the shake-up in Singapore, despite the Italian marque struggling on circuits lacking long straights this season.

"We knew that Spa and Monza would be difficult for us," Wolff said of the previous two races.

"On paper, we should be strong in Singapore -- as should Red Bull. Let's see if we are really demolishing them there.

"But I have no doubt that Ferrari will have learned and will have a good package."

Red Bull have enjoyed 12 podium finishes in Singapore since 2008, including three wins, and the Milton Keynes-based outfit will be hoping Max Verstappen can improve on his second-place finish from a year ago to stay ahead of Leclerc in their battle for third in the overall standings.

Vettel knows his chances of recording a first victory since Belgium last year will have diminished due to the nature of the remaining circuits on the calendar, but the German four-times world champion will be looking to seize on any opportunities that may fall his way.

"I think we still have some races coming where we will be probably more competitive than others, but overall it's just about getting a good weekend," Vettel said.

"I think the speed is there, so I'm not worried, it's honestly just a matter of putting things together. But we have a lot of races and a lot of time."