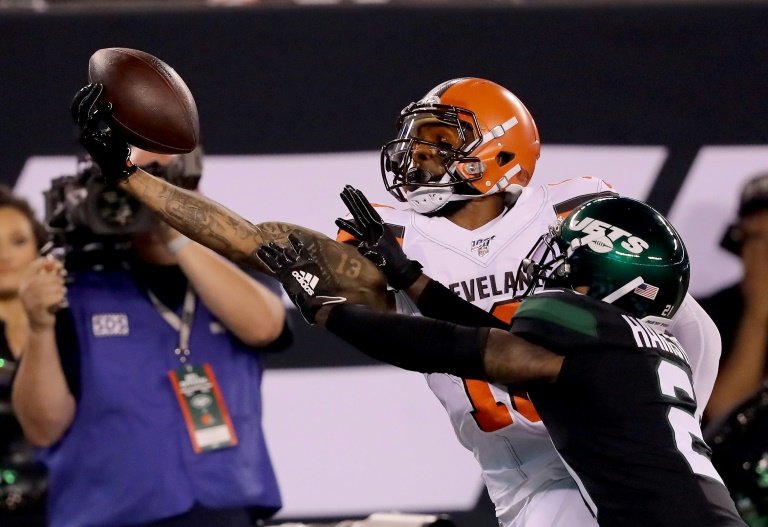 Baker Mayfield quieted his critics and Odell Beckham delivered the knockout blow as the Cleveland Browns earned their first win of the season with a 23-3 rout of the banged-up New York Jets.

Quarterback Mayfield completed 19 of 35 passes for 325 yards, including an 89-yard strike to Beckham in the third quarter that put the National Football League game out of reach.

Beckham, who has been attracting more attention for his game-day accessory choices than his play on the field, ran unimpeded for the longest touchdown of his career.

"I was just praying I was going to make it. I had to kick it into overdrive," said Beckham, who also had a spectacular one-handed grab in the first quarter. "I have lost enough games... To win is a good feeling."

Mayfield needed a victory on the NFL's Monday night stage at the MetLife Stadium to erase memories of the Browns' 30-point week one loss to the Tennessee Titans at home.

The Jets were ailing heading into the contest with starting quarterback Sam Darnold out indefinitely with mono. Linebacker C.J. Mosley (groin) and defensive tackle Quinnen Williams (ankle) are also sidelined.

The laundry list of injuries grew Monday with backup quarterback Trevor Siemian going down with a nasty ankle injury and wide receiver Demaryius Thomas was unable to finish the game due to a hamstring injury.

Beckham, who was dealt to the Browns from the Giants five months ago, finished with six catches for 161 yards in front of the crowd of 78,500.

He was forced to leave the game briefly after officials told him he couldn't wear a tinted visor.

Beckham had just six touchdowns last year, a far cry from his career-best 13 with the Giants in 2015.

His one-handed catch Monday brought back memories of a similar highlight-reel stab he made during his rookie season with New York.

Browns defensive end Chris Smith played the game just five days after his girlfriend Petara Cordero was killed on a highway in Cleveland.

Cordero, 26, was with Smith when their Lamborghini broke down on a highway and she was struck by another car while standing on the road's shoulder.

Siemian was injured in the second quarter on a roughing the quarterback got from Browns defensive end Myles Garrett, who had two roughing calls for hits on Siemian in the game.

His replacement, Luke Falk, started the season on the practice roster. Falk had some success getting the ball downfield but was unable to get the Jets offence into the endzone. Sam Ficken kicked a 46-yard field goal late in the first half, but it was the only points the Jets could manage on the night.

Falk completed 20 of 25 passes for 198 yards for the Jets, who have lost seven straight home games.

It is not likely to get any easier for the Jets, who play the New England Patriots next week.