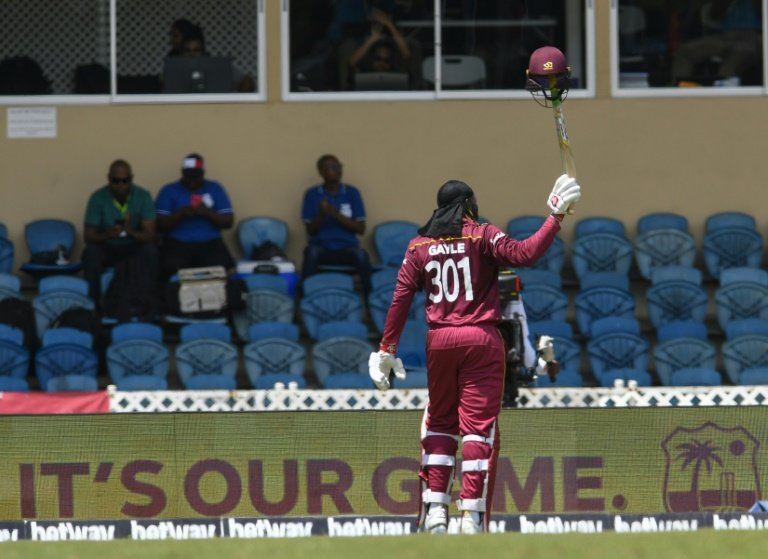 Chris Gayle was at his most rampant in pacing the West Indies to a competitive total of 240 for seven batting first against India in the rain-affected third and final one-day international in Trinidad on Wednesday.

In a match reduced to 35 overs-per-side because of lengthy stoppages for inclement weather during the course of the home side's innings, India were set a revised target of 255 based on the DLS scoring method.

Following a 59-run win via the DLS method in the second match at the same venue on Sunday, India held an unassailable lead going into this match at the Queen's Park Oval.

Rain forced the abandonment of the first match as a no-result in Guyana last week.

Playing what is believed may be his final ODI in a 20-year-international career, in which he hopes to still represent the Caribbean in defence of the World T20 title in 14 months' time in Australia, Gayle savaged the Indian bowlers after his captain Jason Holder chose to bat first, racing to 72 off just 41 balls with five sixes and eight fours distinguishing his typically bludgeoning innings.

Opening partner Evin Lewis made a bold attempt to match arguably the most destructive power-hitter in the international game, his innings of 43 coming off 29 deliveries and embellished with three sixes and five fours.

Their rampage had taken the West Indies to 114 after ten overs, the most productive ten-over start to an ODI since the 2015 World Cup.

However Lewis departed in the next over, the first bowled by leg-spinner Yuzvendra Chahal, while Gayle was well caught by Indian captain Virat Kohli at mid-off striking out at Khaleel Ahmed.

As he left the field, the manner of the Indian players' appreciation of the 39-year-old's innings and his acknowledgement of the applause as he left the field left the distinct impression that has played his final ODI innings.

There followed a lengthy rain stoppage and the West Indies lost wickets in the mad scramble for runs on the resumption with the match reduced to 35 overs-per-side.

Ahmed picked up two more wickets to be the most successful bowler, although he was also the most expensive bowler, conceding 68 runs off seven overs.

Mohammed Shami picked up two wickets but the spinners –- Chahal, Kedar Jadhav and Ravindra Jadeja –- were the most economical for India during the frenetic innings.

Chahal replaced left-armer Kuldeep Yadav, who claimed the vital wickets of Shimron Hetmyer and top-scorer Lewis in the second ODI, in an exchange of wrist-spinners in the Indian line-up.