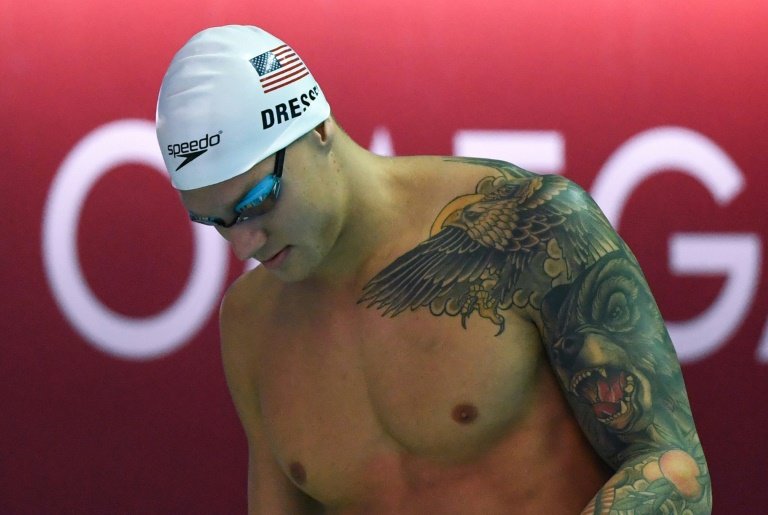 American Caeleb Dressel said Monday that he has been channelling his inner Bruce Lee to keep himself focused as he chases history at the swimming world championships.

The 22-year-old, who captured seven gold medals in 2017 to match the achievement of countryman Michael Phelps 10 years earlier, credited a book on martial arts for restoring his inner calm before winning the 50 metres butterfly title.

"I woke up with a heart rate of 150 -- I don't know why, maybe a bad dream or something," said Dressel after bagging his second gold medal of the week in South Korea.

"I thought 'goodness gracious!' so I went for a couple of walks, read a book. I didn't have anything this morning so I had nine hours of literally hanging around."

Dressel revealed that he turns to a book inspired by Bruce Lee called "Zen in the Martial Arts" -- which teaches how the daily application of Zen principles can improve physical powers and mental discipline -- to bring him peace.

"I've read it three times," he said after winning the 50m fly in a championship record of 22.25 seconds.

"It was kind of a weird day," added Dressel. "I didn't have anything this morning so I got to sleep in. The waiting game can be tricky. I'm not a car geek but I watched some car videos, tried to stay busy."

Dressel could potentially surpass his astonishing seven-title haul from Budapest this week but refuses to make any medal predictions.

"I'm not here to count medals," he insisted. "That's not what I do. I love the sport, it brings a lot of obstacles that are hard to overcome. You can't reach perfection unless you reach zero seconds -- it's just the constant chase for perfection."

Dressel believes he is a stronger swimmer than the one who took the sport by storm in 2017.

"I'm in a better place than two years ago," he said. "I just tried to find a fine line between muscling in and staying relaxed.

"Just trying to get better each race. If I try to be fast then I'm no good so it's better just to shut everything off and let instinct take over."

Dressel, set to take off on a cruise with his swimming buddies after the world championships, added: "It never gets old, standing on the podium."