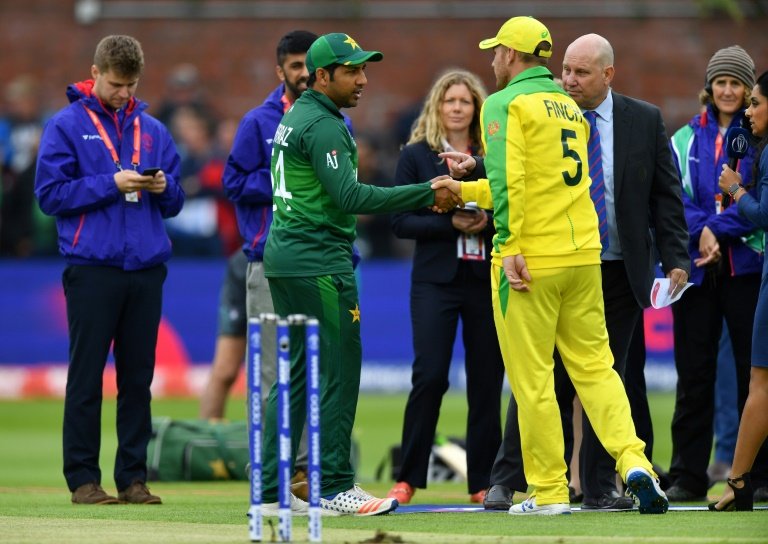 Pakistan captain Sarfaraz Ahmed decided to give his bowlers first use of a green-tinged pitch on an overcast morning after winning the toss in their World Cup match against Australia at Taunton on Wednesday.

Pakistan brought in an extra paceman in Shaheen Shah Afridi and dropped leg-spinner Shadeeb Khan in the only change to the side that bounced back to beat England by 14 runs after they started the tournament with a seven-wicket defeat by the West Indies.

Pakistan's last group match, against Sri Lanka, was washed out without a ball bowled.

Australia made two changes from the side that lost to India by 36 runs at the Oval on Sunday -- the reigning champions' first defeat of this tournament.

Top-order batsman Shaun Marsh replaced injured all-rounder Marcus Stoinis, out with a side strain, and Australia opted to play an extra seamer in Kane Richardson, with leg-spinner Adam Zampa dropped.

"It's a fresh pitch, with grass on it and there is a little bit of moisture around," said Sarfaraz. "Unfortunately we didn't play in the last game but we've had three days of hard practice."

Australia captain Aaron Finch said he would also have chosen to bowl had he won the toss.

"In one-off games against teams like this, you have to expect the best of the opposition," he said. "I think there'll be swing in the air and a little bit of seam today."

Pakistan were set to wear black armbands as a mark of respect for former international Akhtar Sarfaraz and umpire Riaz Uddin, both of whom died recently.