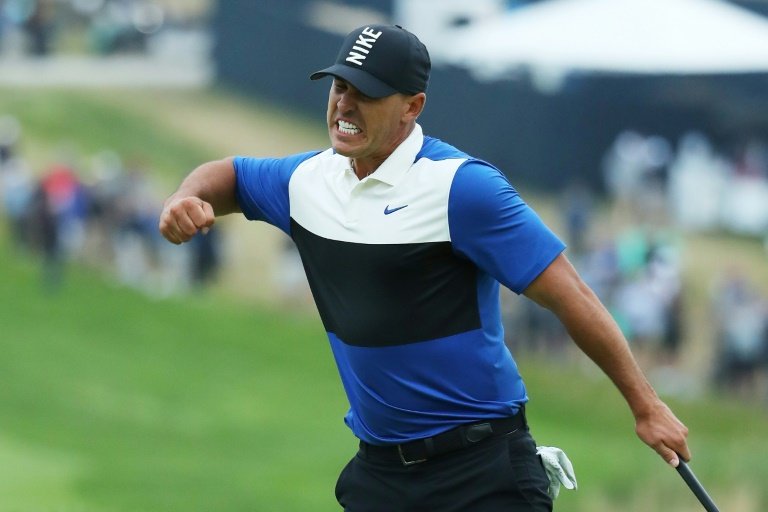 Brooks Koepka held off a late charge from Dustin Johnson to capture his second consecutive PGA Championship on Sunday, completing a wire-to-wire victory for his fourth major title in nerve-wracking fashion.

A record seven-stroke lead for Koepka was reduced to a single shot, but he withstood making four bogeys in a row on the back nine and another at 17 for an unexpectedly narrow triumph.

Koepka fired a four-over par 74 final round at windy Bethpage Black to finish 72 holes on eight-under 272 and defeat Johnson by two strokes, replacing him as world number one as a result.

"I'm just glad we don't have any more holes to play," Koepka said. "That was a stressful round of golf. I'm just glad to have my hands on this trophy again."

Bogeys by Johnson at 16 and 17 made the difference but Koepka made bogey at the par-3 17th, then escaped sand and weeds off the 18th tee by finding the fairway and green then sinking a six-foot putt for the victory. 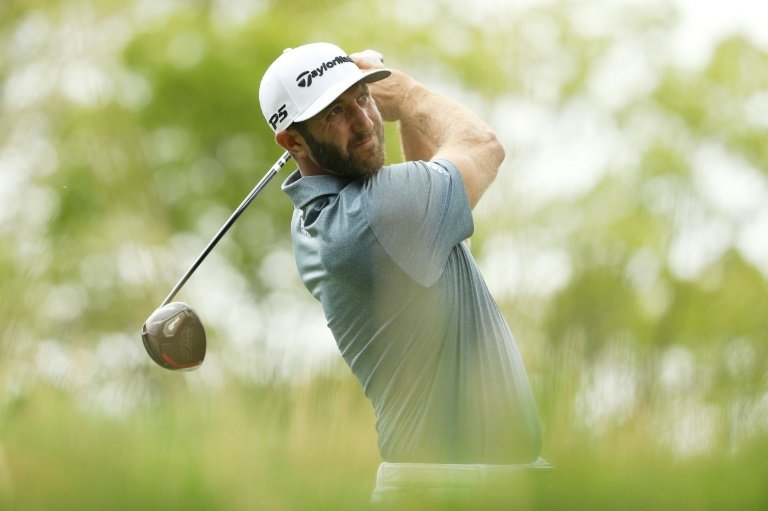 Applying pressure: Dustin Johnson closed within one stroke of runaway leader Brooks Koepka on the way to a runner-up finish at the PGA Championship at Bethpage Black / © GETTY IMAGES NORTH AMERICA/AFP

"He did a great job putting pressure on me, making me play some solid golf down the stretch," Koepka said. "He played great."

Koepka, who seeks his third US Open win in a row next month at Pebble Beach, became the first man to own back-to-back titles at two majors simultaneously by capturing the Wanamaker Trophy and the $1.98 million (1.77 million euro) top prize.

"This is unbelievable," Koepka said. "I don't know if I even dreamed this. It's amazing."

Koepka called it the most satisfying of his four majors wins, adding, "I was able to refocus. That was the key word for the day."

Koepka seized a tournament-record lead of seven strokes after 54 holes on 12-under par 198.

No man has led a major by so much so late and lost. But Koepka came close.

Johnson, who shot 69, shrank the margin to four shots at the turn and just one with four holes to play, only for Koepka to outlast his US compatriot.

Johnson, seeking his second major title after the 2016 US Open, was hoping to match the best final-round win comeback in PGA history, John Mahaffey's seven-shot rally in 1978.

Instead, he completed a career "runner-up" Grand Slam, having placed second at the 2011 British Open, 2015 US Open and last month's Masters.

"I'm pleased with the way I played. I gave myself a chance," Johnson said. 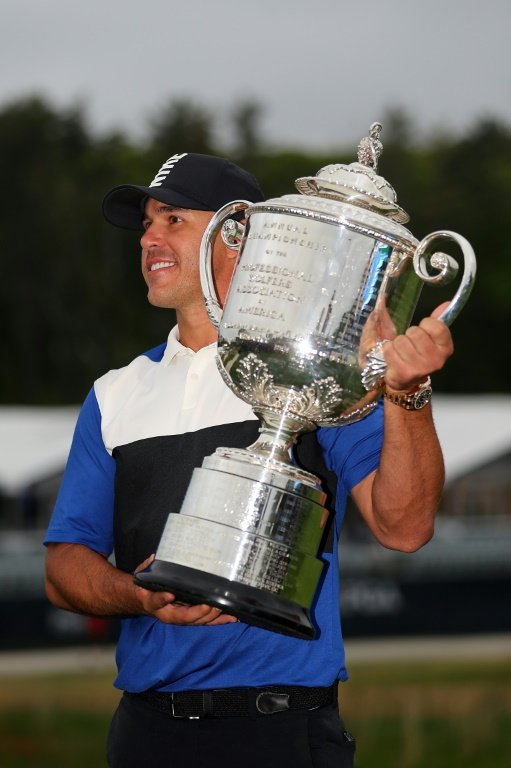 Hands on the trophy: Brooks Koepka lifts the Wanamaker trophy for the second straight year after a two-shot win in the PGA Championship at Bethpage Black / © GETTY IMAGES NORTH AMERICA/AFP

Koepka made the turn on 12-under, answering an opening bogey with a birdie at the par-5 fourth, while Johnson made birdies at the fourth, sixth and nine holes to reach 8-under, shrinking Koepka's lead to its lowest since Friday afternoon.

Koepka hit a gap wedge to two feet at the 10th hole and tapped in for birdie while Johnson took a bogey at 11 to stretch Koepka's margin back to six strokes.

But Koepka followed with four consecutive bogeys while Johnson birdied the 15th for the fourth day in a row, trimming the margin to a single shot as an electric atmosphere began to build among a vocal New York crowd.

"How could you not know with the DJ chants," Koepka said. "I heard everything."

But Johnson missed an eight-foot par putt at 16, giving Koepka a two-shot edge, and Johnson went over the green at the par-3 17th on the way to another bogey, boosting Koepka's margin back to three shots.

"I knew I needed to do something on the last three holes," Johnson said.

Koepka ended his bogey run by parring 15 and 16 but missed a four-foot par putt at the par-3 17th while Johnson closed with a par, leaving Koepka two ahead before the last hole drama.

Koepka became the first player to win his first four majors in two years or less, with only Woods, Jack Nicklaus and Ben Hogan matching him for so many majors in such a span.

After a course-record 63 on Thursday, Koepka produced the lowest 36-hole score in major golf history on 12-under 128.

Koepka has only won two non-major US PGA events, the 2015 Phoenix Open for his first tour title and last October's CJ Cup in South Korea.