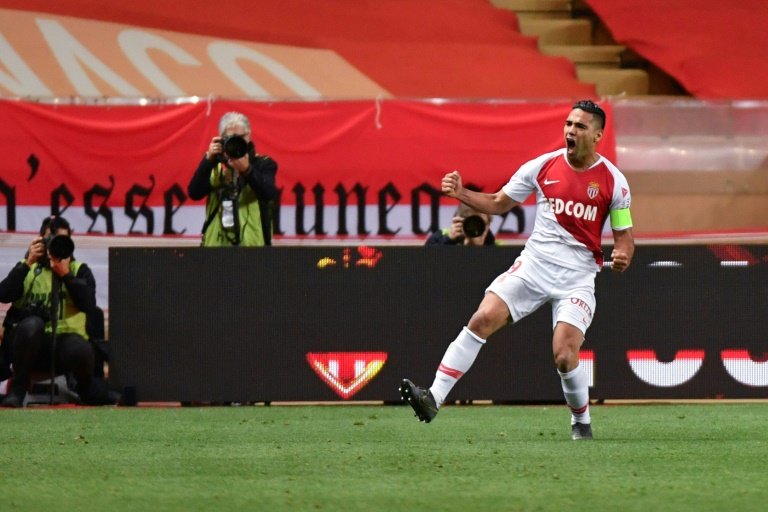 Monaco virtually made sure of their French Ligue 1 survival with a 2-0 win over Amiens on Saturday while champions PSG signed off their home campaign with Kylian Mbappe scoring his 32nd league goal of the season in a 4-0 win over Dijon.

Radamel Falcao and Alexsander Golovin scored in either half at the Stade Louis II to take Monaco to 36 points and three above the drop zone with one match left to play.

Monaco, the 2017 champions, are not mathematically safe but they have a three-point lead over Caen who occupy the relegation play-off spot with a goal difference of seven.

While Monaco coach Leonardo Jardim was cutting a relieved figure, he found himself discussing the fact that Falcao was not wearing an anti-homophobia armband which had been distributed by the league.

"I was using Falcao's armband, I wore it," said Jardim. "The most important thing that somebody from the club wore it and applied what was demanded of us by the league."

Guingamp were already relegated while Dijon were pushed to the edge of the trap door when they lost 4-0 at PSG.

French World Cup winner Mbappe, back from a three-match ban for a red card in the French Cup final, scored two of the goals to take his league tally to 32 with one game left.

He is the first French player to reach that figure since Herve Revelli scored 31 for Saint-Etienne in the 1966/67 season.

PSG were presented with the Ligue 1 trophy for the eighth time against a background of fireworks after a win which preserved their 16-point lead.

Saturday's result was never in doubt after Angel Di Maria and Edinson Cavani had given PSG a 2-0 lead inside the first four minutes.

Suspended Neymar, the world's most expensive footballer, watched the game from the stands before joining his teammates in a lap of honour in front of their fans at the Parc des Princes.

"We wanted to leave behind a good image before the end of the season with the quality we have shown throughout the campaign," said PSG defender Thilo Kehrer.

"We did that by winning 4-0, it was important for our supporters. It's a great feeling to be league champions."

Elsewhere, Lille made sure of second place and a spot in the Champions League group stages with a 5-0 rout of Angers.

Nicolas Pepe, who will leave the club in the summer, scored twice to take his season tally to 22.

Lyon will finish third -- enough for a Champions League preliminary round place -- after a 3-0 win over Nice.

After the game, Lyon president Jean-Michel Aulas confirmed that Brazil's Sylvinho, who once played for Barcelona and Arsenal, will become the new coach to replace Bruno Genesio.

The 45-year-old was hand-picked for the job by compatriot Juninho, a former Lyon star who will be the club's new sporting director.

Sylvinho had been working as right-hand man to Brazil coach Tite and had been preparing a team for the 2020 Olympics in Japan.