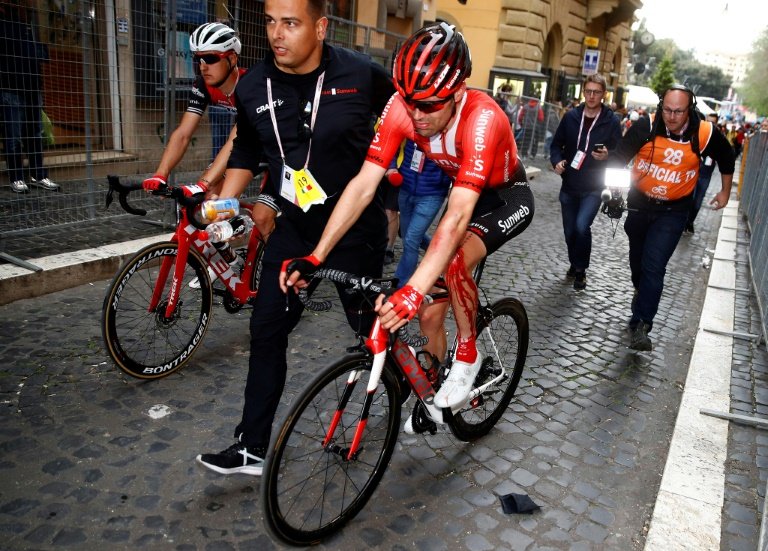 "Fingers crossed!" Tom Dumoulin confirmed he will continue the Giro d'Italia despite a sore knee. / © AFP

Former Giro d'Italia winner Tom Dumoulin confirmed Wednesday he will continue this year's race despite an knee injury picked up in a fall on the fourth stage.

"Knee still hurts but we hope it will get better through the day. Will give everything I have to make it. Fingers crossed," the Dutch rider, winner of the three-week race around Italy in 2017, wrote on Twitter.

The fifth stage, a short 140km run from Frascati, just south of Rome, to Terracina, will be mostly raced under the rain, with a 1.5km home straight which should set the scene for a spectacular sprint finish.

"He (Dumoulin) has been cleared to race by the team's medical staff, but is still suffering with his knee," his Sunweb team said.

"He will give it his best shot and see what the day brings."

Dumoulin came second at both the Giro d'Italia and the Tour de France in 2018, as well as winning the 2017 Giro and the 2017 world championships time-trial, making him a chief contender in all major tours and races.

"For sure, the overall ranking is over for me," Dumoulin said on Tuesday.

The 28-year-old is now in 56th position 4min 30sec behind race leader Primoz Roglic of Slovenia.

"There is no fracture, which is good news, but my knee is very swollen," he added.